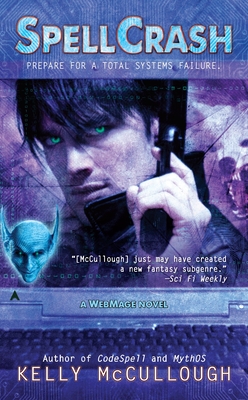 Prepare for a total systems failure in this WebMage novel from Kelly McCullough.

Ravirn—umpteenth great-grandson of one of the three Fates—is a talented sorcerer and a computer hacker extraordinaire in a world where magic has merged with 21st century technology. But even though he’s the best hacker around, there are some things that even he can’t fix.

Necessity—the sentient computer that runs the multiverse—is still broken, and the only thing that can repair her is a massive reboot. But while Necessity is offline, anyone with enough power can attempt to seize control of the entire multiverse. As the time for the reboot draws near, four clear contenders emerge: Zeus, Hades, Fate, and Eris—all Gods from the Greek mythos who are more than a match for any man, even a demi-god like Ravirn. Now, in order to protect Necessity, Ravirn has to utilize all of his skills as a mage and fight to prevent complete chaos—even if it costs him his life...