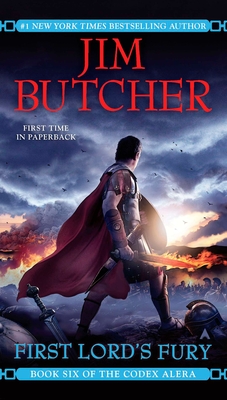 In the final novel in #1 New York Times bestselling author Jim Butcher's acclaimed Codex Alera series, the people of Alera—who use their unique bond with the elementals of earth, air, fire, water, wood, and metal for protection—must face the ultimate conflict…

For Gaius Octavian, life has been one long struggle. Battling ancient enemies, forging new alliances, and confronting the corruption within his own land, he became a legendary man of war and leader of men—and the rightful First Lord of Alera.

Now, the end of all he fought for is close at hand. The brutal, dreaded Vord are on the march, using fear and chaos to turn the Alerans against one another, and forcing those who will not submit to flee to the outer reaches of the realm.

Perhaps for the final time, Gaius Octavian and his legions must stand against the enemies of his people. And it will take all his intelligence, ingenuity, and furycraft to save their world from eternal darkness...

“[A] fitting conclusion to the Codex Alera.”—Booklist

“This is an entertaining and great super finish to the Codex Alera...The storyline is fast-paced...Fans will relish the saga.”—Genre Go Round Reviews

“Jim Butcher is an absolute master of pace...The book is the climax of the entire series, building tension until the last sixty pages are a perfectly placed hold-your-breath conclusion to the series.”—Born Reader