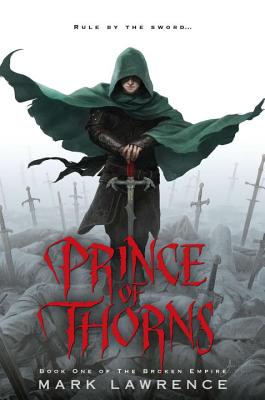 A stunning fantasy debut from a major new talent
When he was nine, he watched his mother and brother killed before him. By the time he was thirteen, he was the leader of a band of bloodthirsty thugs. By fifteen, he intends to be king...
It's time for Prince Honorous Jorg Ancrath to return to the castle he turned his back on, to take what's rightfully his. Since the day he was hung on the thorns of a briar patch and forced to watch Count Renar's men slaughter his mother and young brother, Jorg has been driven to vent his rage. Life and death are no more than a game to him-and he has nothing left to lose.
But treachery awaits him in his father's castle. Treachery and dark magic. No matter how fierce, can the will of one young man conquer enemies with power beyond his imagining?

Mark Lawrence is a research scientist working on artificial intelligence. He is a dual national with both British and American citizenship, and has held secret-level clearance with both governments. At one point, he was qualified to say, "This isn't rocket science--oh wait, it actually is." He is the author of the Broken Empire trilogy (Prince of Thorns, King of Thorns, and Emperor of Thorns), the Red Queen's War trilogy (Prince of Fools, The Liar's Key, and The Wheel of Osheim) and the Book of the Ancestor series (Red Sister).
or
Not Currently Available for Direct Purchase
Copyright © 2020 American Booksellers Association