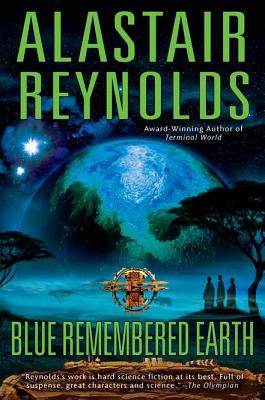 With his critically acclaimed Revelation Space novels, Alastair Reynolds confirmed his place among the leaders of the hard-science space opera renaissance. ("Publishers Weekly") With "Blue Remembered Earth, " the award-winning author begins a new epic, tracing generations of one family across more than ten thousand years of future history into interstellar space and the dawn of galactic society
One hundred and fifty years from now, Africa has become the world's dominant technological and economic power. Crime, war, disease and poverty have been eliminated. The Moon and Mars are settled, and colonies stretch all the way out to the edge of the solar system. And Ocular, the largest scientific instrument in history, is about to make an epochal discovery
Geoffrey Akinya wants only one thing: to be left in peace, so that he can continue his long-running studies into the elephants of the Amboseli basin. But Geoffrey's family, who control the vast Akinya business empire, has other plans for him. After the death of his grandmother Eunice the erstwhile space explorer and entrepreneur something awkward has come to light on the Moon, so Geoffrey is dispatched there to ensure the family name remains untarnished. But the secrets Eunice died with are about to be revealed secrets that could change everything...or tear this near utopia apart.

Alastair Reynolds was born in Barry, South Wales, in 1966. He studied at Newcastle and St. Andrew's Universities and has a Ph.D. in astronomy. A former astrophysicist for the European Space Agency, he lives in the Netherlands, near Leiden. He is now writing full-time.
Loading...
or
Not Currently Available for Direct Purchase