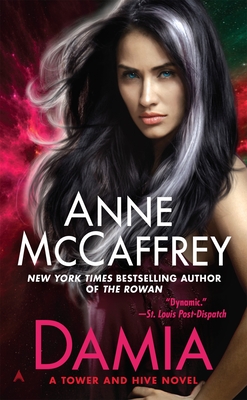 New York Times bestselling fantasy author Anne McCaffrey “interweaves an engrossing romance with a coming-of-age story”(Publishers Weekly) in this novel in the Tower and Hive series.

Damia is the daughter of Prime Talents The Rowan and Jeff Raven. Her own telepathic and telekinetic abilities manifested at an early age, unimaginable powers even greater than her parents’, challenging to wield much less control. As willful as her mother ever was, Damia defies her family’s attempts to tame and train her—only to bond with Afra Lyon, a Talent who serves The Rowan, and who becomes the object of her affection.

When she comes of age, Damia learns that a Prime of her capabilities and temperament has no time for love. Assigned to serve the farthest human colonized world from Earth, Damia leads a lonely existence until she telepathically connects with an alien presence in another galaxy—a potential threat not only to Damia, but to the love Afra wants to share with her...

Praise For Damia (A Tower and Hive Novel #2)…

“McCaffrey interweaves an engrossing romance with a coming-of-age story as she examines the issue of responsibility in a society where survival depends on the abilities of a gifted few.”—Publishers Weekly

“[A] well-crafted universe...[Damia] both refines and extends characterizations, especially in interrelationships and the use of mental powers…A winning choice for the author’s legion of fans.”—Booklist

“Anne McCaffrey has created worlds whose elements elude the imaginations of most other writers…[Damia] is a perfect example of what makes McCaffrey’s writing so much fun.”—The Globe and Mail