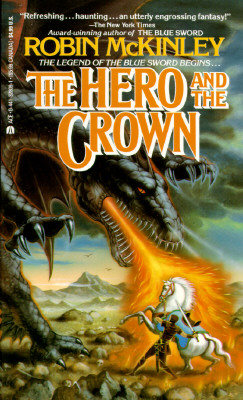 For over a decade, Robin McKinley's richly woven saga has gripped the imagination of readers and caused critics to hail her as a master of fantasy. It is the story of Aerin, haunted since childhood by the legend of her mother-a "witchwoman" who enspelled the king and then died of disappointment after giving birth to a daughter, rather than the heroic son the kingdom needed. But little did the young princess know the long-dormant powers of her mother would wield their own destiny. For though she was a woman, Aerin was destined to be the true hero who would one day wield the power of the Blue Sword....

Praise For The Hero and the Crown…

“Refreshing…[McKinley] writes a sonorous, deliberately repetitive prose that, in its somber rhythms, evokes the sounds of Middle Earth as well as of ancient bards. It sustains the otherworldly atmosphere she painstakingly creates through the judicious use of arcane and invented words, restrained descriptions, and interior monologues…[She has] created an utterly engrossing fantasy.” –The New York Times

“I respect her writing and reread her constantly, finding new perception each time.” –Anne McCaffrey, bestselling author of The Dragonriders of Pern

“What Robin McKinley does to perfection in The Hero and the Crown is take some of the standard elements of fantasy and, with her uniquely personal vision, make them fresh and delightful again.” –The Christian Science Monitor

“Beautifully rendered…McKinley’s battle scenes are galvanizing and her romantic ones stirring.” –Booklist

“Robin McKinley’s Damar books are among the finest sword and sorcery being written today.” –Locus

Robin McKinley has won various awards and citations for her writing, including the Newbery Medal for The Hero and the Crown and a Newbery Honor for The Blue Sword. Her other books include Sunshine; the New York Times bestseller Spindle's End; two novel-length retellings of the fairy tale Beauty and the Beast, Beauty and Rose Daughter; and a retelling of the Robin Hood legend, The Outlaws of Sherwood. She lives with her husband, the English writer Peter Dickinson.
Loading...
or
Not Currently Available for Direct Purchase