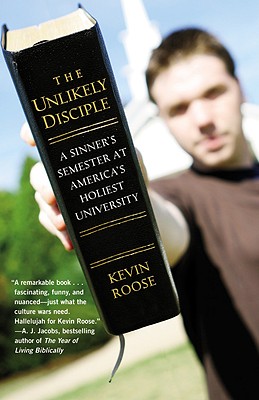 The hilarious and heartwarming, respectful and thought-provoking memoir of a college student's semester at Liberty University, the "Bible Boot Camp" for young evangelicals, that will inspire believers and nonbelievers alike.

No drinking.
No smoking.
No cursing.
No dancing.
No R-rated movies.

Kevin Roose wasn't used to rules like these. As a sophomore at Brown University, he spent his days fitting right in with Brown's free-spirited, ultra-liberal student body. But when Roose leaves his Ivy League confines to spend a semester at Liberty University, a conservative Baptist school in Lynchburg, Virginia, obedience is no longer optional.

Liberty is the late Reverend Jerry Falwell's "Bible Boot Camp" for young evangelicals, his training ground for the next generation of America's Religious Right. Liberty's ten thousand undergraduates take courses like Evangelism 101 and follow a forty-six-page code of conduct that regulates every aspect of their social lives. Hoping to connect with his evangelical peers, Roose decides to enroll at Liberty as a new transfer student, chronicling his adventures in this daring report from the front lines of America's culture war.

His journey takes him from an evangelical hip-hop concert to a spring break mission trip to Daytona Beach (where he learns to preach the gospel to partying coeds). He meets pastors' kids, closet doubters, Christian rebels, and conducts what would be the last print interview of Rev. Falwell's life.

Praise For The Unlikely Disciple: A Sinner's Semester at America's Holiest University…

"Hallelujah for Kevin Roose. This is a remarkable book. He takes us on a fascinating, funny, nuanced journey that doesn't condescend or make glib judgments. It's just what the culture wars need. If I didn't already have kids, I'd adopt Kevin."


"What happens when a Brown undergrad goes undercover at Liberty University? If he's a writer as insightful and open-minded as Kevin Roose, he ends up learning as much about himself as he does about the evangelical Christians he lives with. The Unlikely Disciple provides a funny, compassionate, and revealing look at Jerry Falwell's 'Bible Boot Camp,' and the surprisingly diverse band of true believers who make it their home."

"Kevin Roose has produced a textured, intelligent, even sympathetic, account of his semester at Liberty University. He eschews caricature and the cheap shot in favor of keen observation and trenchant analysis. THE UNLIKELY DISCIPLE is a book of uncommon wisdom and insight. I recommend it with enthusiasm."

"Kevin Roose is a delightful writer, and this is a humane book. Read it and I predict you'll have less paranoia, more exposure to 'the other,' and a larger dose of Roose's generous and hopeful faith."
--Brian McLaren, author of A New Kind of Christian, A Generous Orthodoxy, and Everything Must Change

"Keenly observed, funny, and compassionate. Kevin Roose parachutes us into a seldom-glimpsed and little understood pocket of America, then guides us through a story of religion and country more resonant than any of us could have imagined."
--Robert Kurson, New York Times bestselling author of Shadow Divers and Crashing Through


"This is a brilliant book. Absolutely brilliant. Roose's wisdom, humanity, and love kept me going. And I laughed. A lot."
-- Rob Bell, founding pastor of Mars Hill Bible Church and bestselling author of Velvet Elvis and Sex God