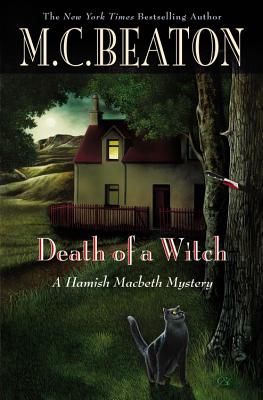 Death of a Witch

Returning from a foreign holiday, Hamish Macbeth is worried because he senses a dark cloud of evil hanging over the Highland village of Lochdubh. He learns that a newcomer, Catriona Beldame, is regarded as a witch and various men have been seen visiting her. Hamish himself is charmed by her until he finds out she has been supplying dangerous potions. At first the villagers won't listen to him, saying that the loveless Hamish has turned against all women. He threatens to kill her so that when she is found murdered, he must clear his name and then work to solve yet another murder to bring peace and quiet back to his beloved village. His investigations are complicated by a romance with a female forensic expert. Perhaps he'll get married at last!


Praise For Death of a Witch…

Praise for M.C. Beaton and the Hamish Macbeth series:
"It's always a pleasure to return to Lochdubh, the picturesque village in the Scottish highlands."
-New York Times Book Review

"Macbeth is the sort of charcter who slyly grows on you...as you realize that beneath his unassuming exterior, he's a whiz at cutting through all the hokum."
-Chicago Sun-Times

"Superb entertainment, as rich and warming as a fine malt whisky, and every bit as addictive."
-Houston Chronicle

M.C. Beaton lives in the Cotswolds with her husband. In addition to the Hamish Macbeth series, she writes the Agatha Raisin mystery series.
Loading...
or
Not Currently Available for Direct Purchase