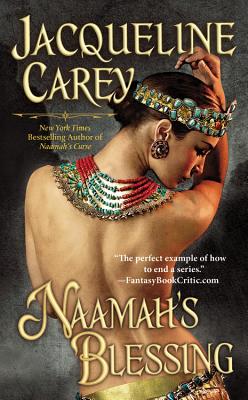 The explosive concluding installment in the propulsive and mystical Naamah's trilogy.

Returning to Terre d'Ange, Moirin finds the royal family broken. Wracked by unrelenting grief at the loss of his wife, Queen Jehanne, King Daniel is unable to rule. Prince Thierry, leading an expedition to explore the deadly jungles of Terra Nova, is halfway across the world. And three year old Desirée is a vision of her mother: tempestuous, intelligent, and fiery, but desperately lonely, and a vulnerable pawn in a game of shifting political allegiances.

As tensions mount, King Daniel asks that Moirin become Desirée's oath-sworn protector. Navigating the intricate political landscape of the Court proves a difficult challenge, and when dire news arrives from overseas, the spirit of Queen Jehanne visits Moirin in a dream and bids her undertake an impossible quest.

Another specter from the past also haunts Moirin. Travelling with Thierry in the New World is Raphael de Mereliot, her manipulative former lover. Years ago, Raphael forced her to help him summon fallen angels in the hopes of acquiring mystical gifts and knowledge. It was a disastrous effort that nearly killed them, and Moirin must finally bear the costs of those bitter mistakes.

"The world is simply too stunning and too beautiful for me not to want to visit it again and again.... If you love epic, sweeping fantasy mixed with romance, do give this series a try."
—Book Addicts

"Ms. Carey writes some of the most gorgeous, imaginative fantasy I've ever had the pleasure of reading...Naamah's Blessing is a near pitch-perfect finale to a rare, truly fantastic series...the conclusion to Moirin's story is handled with the deftness, emotional poignancy and depth that is Jacqueline Carey's trademark...With Moirin's adventures concluded, I can only hope that there is more in this universe coming, and soon."—The Book Smugglers