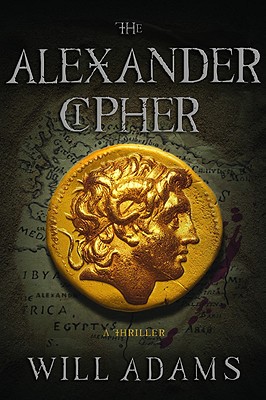 Workers in Alexandria are excavating for a new building when they discover the ruins of an old tomb, and all work crashes to a halt. According to federal law in Egypt, all discoveries must be properly catalogued by archeologists and this tomb has unusual relics and representations, apparently contemporary with Alexander the Great.


Daniel Knox's first love is history and archeology, specifically on Alexander the Great. When he pisses off a local mobster on the coast of Egypt, he heads to Alexandria to an archaeology colleague's apartment to hide out for a while. He learns his friend is getting to participate on the dig for this newly discovered tomb. Sneaking in with his friend, Daniel sees signs that the find is far bigger than anyone realizes and might hold clues to finally unravelling one of the world's greatest mysteries: Where is Alexander the Great buried?


In his lifetime, Alexander was beloved as a god, and across the Mediterranean, everyone wanted to be close to him. Upon his death, there was a mad scrabbling among his former allies to secure his empire for themselves. Even now, nearly 2500 years later, Alexander is still being fought over. With the discovery of this tomb and the revelation of its relics, the race is on to find Alexander. Rival archeologists, Egyptian officials, and Macedonian nationalists all scurry and scramble, attacking each other along the way as they hunt for a glorious prize--the body of Alexander the Great.

Praise For The Alexander Cipher…

"[Knox is] a resourceful and appealing hero, and... the action crackles along with betrayals, vendettas and revelations galore."
-Daily Mail

"A cracking adventure in which Alexander the Great is brought to extraordinary life; plus there's a modern-day search for the conqueror's tomb. Enthralling."
-Observer

Will Adams worked as a shop salesman, painter & decorator, warehouse porter and microfiche technician, before joining a Washington DC-based firm of business history consultants. He wrote a series of corporate histories and biographies for them, taking time off between projects to travel in search of exotic settings for his stories. More recently, he worked for a London communications agency, but he now concentrates on writing fiction full-time. He lives in Essex, England.
Loading...
or
Not Currently Available for Direct Purchase