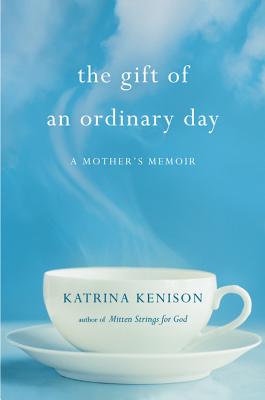 The Gift of an Ordinary Day

The Gift of an Ordinary Day is an intimate memoir of a family in transition-boys becoming teenagers, careers ending and new ones opening up, an attempt to find a deeper sense of place, and a slower pace, in a small New England town. It is a story of mid-life longings and discoveries, of lessons learned in the search for home and a new sense of purpose, and the bittersweet intensity of life with teenagers--holding on, letting go.

Poised on the threshold between family life as she's always known it and her older son's departure for college, Kenison is surprised to find that the times she treasures most are the ordinary, unremarkable moments of everyday life, the very moments that she once took for granted, or rushed right through without noticing at all.

The relationships, hopes, and dreams that Kenison illuminates will touch women's hearts, and her words will inspire mothers everywhere as they try to make peace with the inevitable changes in store.

Praise For The Gift of an Ordinary Day: A Mother's Memoir…

"Kenison writes so beautifully and clearly about what is most important in family life."
—Jane Hamilton, author of A Map of the World and Laura Rider's Masterpiece

"With an honesty and intimacy rarely achieved in modern memoir, Katrina Kenison dissolves yearning into its complex, sensate parts. This is a book about mid-life want and loss. It is also a most knowing book about a most gracious love-about the gifts that are returned to those who find beauty where it falls."
—Beth Kephart, author, House of Dance

This eloquent book is subtitled "A Mother's Memoir," but that's not giving Kenison's chronicle of her sons' increasing independence its full due. It's also about longing and fulfillment , taking stock of failures and achievements, a search for the elusive "something more" of one's existence-and a reminder that life's seemingly mundane moments are often where we find beauty, grace and transformation.
—Family Circle magazine, -

Katrina Kenison is the author of Mitten Strings for God: Reflections for Mothers in a Hurry (Warner Books, 2000). She has appeared on Oprah, as well as other shows. Her writing has appeared in O, Real Simple, Family Circle, Redbook, Better Homes and Gardens, Health, and other publications.