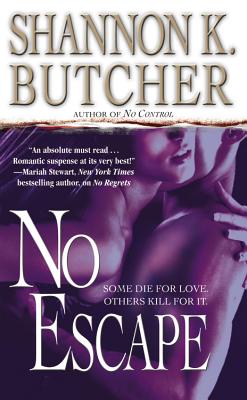 Teacher Isabelle Carson is grief-stricken, angry, and scared. Three of her childhood friends have died. The police say they're suicides, but Isabelle knows they would never, ever take their own lives. Her past binds her to every victim, and she knows it's only a matter of time before the killer comes after her. Only one man can help her now, the only man she's ever trusted, the man who saved her so long ago...

For Grant Kent, Delta Force vet, just being near Isabelle brings back old memories and desires, and stirs longings he'd rather deny. Yet he can't ignore the real terror in her eyes, or resist the thought of holding her again. But even as their friendship begins to blossom into a passionate affair, a killer continues his deadly rampage and plots his next move: the "suicide" of Isabelle Carson.

Praise For No Escape (Delta Force #3)…

ON SHANNON K. BUTCHER AND NO CONTROL:
"Top pick!...This second outing provides ample evidence that Butcher is on the fast track to becoming a major presence in the romantic suspense genre. Chilling plotlines and layered characters add serious punch to this thriller!"
--Romantic Times BOOKreviews Magazine

"Tense, fast-paced...Lana's PTSD and quiet strength are believable and gut-wrenching...Their chemistry is excellent...Butcher is in control."

Shannon K. Butcher learned to write from her husband, bestselling author Jim Butcher, as she helped him with his stories. Soon she found the idea of creating he own too compelling to resist and, after too many years working as an industrial engineer, gladly left that career to write full time. Shannon lives in Missouri with her husband and son, where conversations at the dinner table are more often about fictional things than things that actually happened. You can contact her at her website, www.shannonkbutcher.com.
Loading...
or
Not Currently Available for Direct Purchase