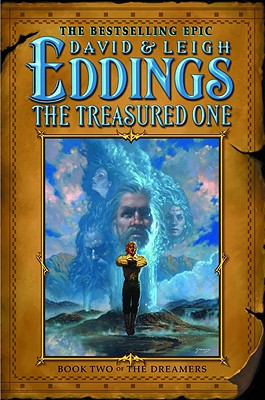 Book Two of The Dreamers

Jalkan stumbled back, spitting blood, teeth, and curses and he clawed at his knife-hilt. Keselo's sword, however, came out of its sheath more smoothly and rapidly. The young man put the point of his sword against the bone-thin Trogite's throat. "Drop it, Jalkan," he said quite firmly. "Drop the knife, or I'll kill you right here on the spot." "But this peasant just hit me!" Jalkan screamed. "That's a hanging offense! I'm an officer!" "Not anymore, you aren't," Narasan declared in a flat tone of voice. "I've put up with you for much too long already, and you've just given me something that I've been waiting for. Your army career is finished, Jalkan, and good riddance." "You can't do that!" Jalkan screamed at Narasan. "I paid gold for my commission! Gold!" -from The Treasured One.

Leigh Eddings has collaborated with her husband since the beginning. They live in Nevada.
Loading...
or support indie stores by buying on