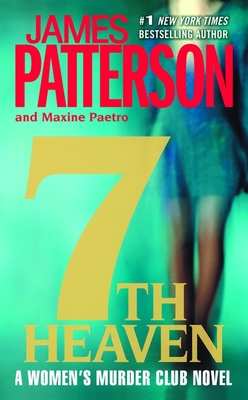 Discover the Women's Murder Club's most terrifying case ever in this New York Times bestseller. As a terrible series of fires blazes through California, the heat begins to rage too close to home.
A terrible fire in a wealthy suburban home leaves a married couple dead and Detective Lindsay Boxer and her partner Rich Conklin searching for clues. And after California's golden boy Michael Campion has been missing for a month, there finally seems to be a lead in his case-a very devastating lead.
As fire after fire consume couples in wealthy, comfortable homes, Lindsay and the Murder Club must race to find the arsonists responsible and get to the bottom of Michael Campion's disappearance. But suddenly the flames are raging too close to home.
Frightened for her life and torn between two men, Lindsay must find a way to solve the most daunting dilemmas she's ever faced-at work and at home.

"The opening two chapters of 7TH HEAVEN should be set to the Mission Impossible theme song. Tension and violence races through those first few pages as surely as that burning fuse tracked across the screen. And you won't be able to stop there."—Blogcritics.org

"A fast-paced thriller . . . a swift and pleasurable read."—ArmchairInterviews.com