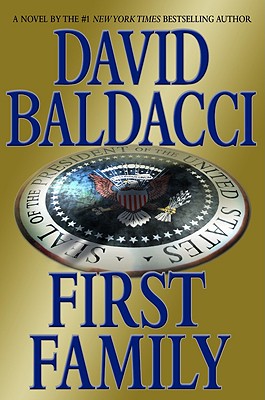 Following the instant #1 New York Times bestseller Simple Genius, Sean King and Michelle Maxwell return in David Baldacci's most heart-pounding thriller to date . . .
FIRST FAMILY
It began with what seemed like an ordinary children's birthday party. Friends and family gathered to celebrate. There were balloons and cake, games and gifts.
This party, however, was far from ordinary. It was held at Camp David, the presidential retreat. And it ended with a daring kidnapping . . . which immediately turned into a national security nightmare.
Sean King and Michelle Maxwell were not looking to become involved. As former Secret Service agents turned private investigators, they had no reason to be. The FBI doesn't want them interfering. But years ago, Sean King saved the First Lady's husband, then a senator, from political disaster. Now, Sean is the one person the First Lady trusts, and she presses Sean and Michelle into the desperate search to rescue the abducted child.
With Michelle still battling her own demons, and forces aligned on all sides against her and Sean, the two are pushed to the absolute limit. In the race to save an innocent victim, the line between friend and foe will become impossible to define . . . or defend.

David Baldacci lives with his family in Virginia. He and his wife have founded the Wish You Well Foundation, a nonprofit organization dedicated to supporting literacy efforts across America. He invites you to visit him at www.david-baldacci.com and his foundation at www.wishyouwellfoundation.org, and to look into its program to spread books across America at www.FeedingBodyandMind.com.
Loading...
or
Not Currently Available for Direct Purchase