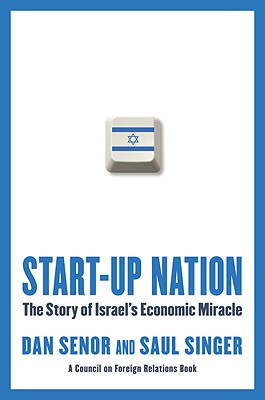 The Story of Israel's Economic Miracle

What the world can learn from Israel's meteoric economic success.
Start-Up Nation addresses the trillion dollar question: How is it that Israel -- a country of 7.1 million, only 60 years old, surrounded by enemies, in a constant state of war since its founding, with no natural resources-- produces more start-up companies than large, peaceful, and stable nations like Japan, China, India, Korea, Canada and the UK?

With the savvy of foreign policy insiders, Senor and Singer examine the lessons of the country's adversity-driven culture, which flattens hierarchy and elevates informality-- all backed up by government policies focused on innovation. In a world where economies as diverse as Ireland, Singapore and Dubai have tried to re-create the "Israel effect", there are entrepreneurial lessons well worth noting. As America reboots its own economy and can-do spirit, there's never been a better time to look at this remarkable and resilient nation for some impressive, surprising clues.

Praise For Start-up Nation: The Story of Israel's Economic Miracle…

"There is a great deal for America to learn from the very impressive Israeli entrepreneurial model... START-UP NATION is a playbook for every CEO who wants to develop the next generation of corporate leaders."

"In the midst of the chaos of the Middle East, there's a remarkable story of innovation. START-UP NATION is... a timely book and a much-needed celebration of the entrepreneurial spirit."
—Meg Whitman, former CEO of eBay

"Senor and Singer's experience[s]...come to life in their illuminating, timely, and often surprising analysis."

"No one else, in my judgment, has written regularly about Israel in recent years with more clarity than Singer."—William Kristol, Editor of The Weekly Standard

"A rich and insightful read."

"Saul Singer's Confronting Jihad should be mandatory reading for anyone, layman or expert, interested in the real Middle East."—Michael Oren, historian and bestselling author of "Six Days of War"

Dan Senor, Adjunct Senior Fellow for Middle East Studies at the Council on Foreign Relations, has been on the front lines of policy, politics, and business in the Middle East. As a senior foreign policy advisor to the U.S. Government , he was one of the longest-serving civilian officials in Iraq. He has also served in Qatar and studied in Israel. Senor's pieces are frequently published by the Wall Street Journal. Saul Singer is the editorial editor of the Jerusalem Post, for which he writes a weekly column, and the author of Confronting Jihad: Israel's Struggle and the World after 9/11. For ten years, he served as a foreign policy advisor on Capitol Hill. http://www.startupnationbook.com/
Loading...
or
Not Currently Available for Direct Purchase