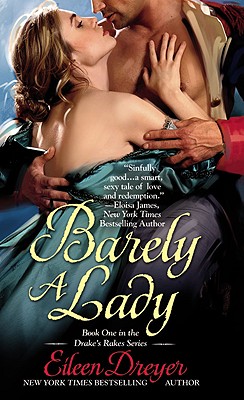 Olivia Grace has secrets that could destroy her. One of the greatest of these is the Earl of Gracechurch, who married and divorced her five years earlier. Abandoned and disgraced, Grace has survived those years at the edge of respectability. Then she stumbles over Jack on the battlefield of Waterloo, and he becomes an even more dangerous secret. For not only is he unconscious, he is clad in an enemy uniform.

But worse, when Jack finally wakes in Olivia's care, he can't remember how he came to be on a battlefield in Belgium. In fact, he can remember nothing of the last five years. He thinks he and Olivia are still blissfully together. To keep him from being hanged for a traitor, Olivia must pretend she and Jack are still married.

To unearth the real traitors, Olivia and Jack must unravel the truth hidden within his faulty memory. To save themselves and the friends who have given them sanctuary, they must stand against their enemies, even as they both keep their secrets.

In the end, can they risk everything to help Jack recover his lost memories, even though the truth may destroy them both?

"Dreyer makes a highly successful venture into the past with this sizzling, dramatic Regency romance."
—Publishers Weekly (starred review)

"Fast plotting, thorough research, and a swaggering-cop style elevate this sixth novel from Dreyer..."
—Publishers Weekly, starred review on With a Vengeance, -

"With its exquisitely crafted characters and delectably sharp prose, this is a romance to treasure."
—Booklist on Some Men's Dreams, -

"Kathleen Korbel skillfully sets a love story amid a fight to save a world. The sparks between Orla and Liam are perfect."
—4 1/2 Stars, Romantic Times BOOKreviews Magazine on Deadly Redemption, -

New York Times best-selling author Eileen Dreyer has won five RITA Awards from the Romance Writers of America, which secures her fourth place in the Romance Writers of America prestigious Hall of Fame. Eileen is an addicted traveler, having sung in some of the best Irish pubs in the world. Eileen also writes as Kathleen Korbel and has over three million books in print worldwide. Born and raised in Missouri, she lives in St. Louis County with her husband Rick and her two children.
Loading...
or
Not Currently Available for Direct Purchase