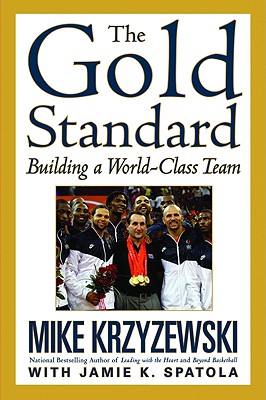 Says Coach K: "In all forms of leadership, whether you are a coach, a CEO, or a parent, there are four words that, when said, can bring out the best in your team, your employees, and your family...I BELIEVE IN YOU.

These four words can mean the difference between a fear of failure and the courage to try."

In his previous bestselling books, Coach K has guided readers to success the way he has guided his teams at Duke University - - with the power of his inspirational words and phenomenal leadership skills.

But that was with college kids.....Now, Coach K has stepped up to take on an entirely new challenge - by volunteering to coach the US Olympic Basketball team. Comprised of some of the biggest NBA stars, Coach K had to work with huge egos and personal rivalries in order to create an American team that could win against the best competition in the world and restore Team USA to the gold standard of basketball.

This is more than a celebratory book - it's Coach K's first-hand account of how he dealt with such stars as Lebron James, Kobe Bryant, Carmelo Anthony and all the rest to buy into his "total team" play. Half a book on basketball, half a book on management techniques, The Gold Standard captures Coach K's personal style and approach to getting different (and sometimes difficult) people to work hard and succeed in reaching a common goal.

Mike KrzyzewskiI has been the basketball coach of the Duke Blue Devils for thirty years, winning three NCAA championships and twelve national Coach of the Year awards. He is revered and respected by sports fans and business leaders everywhere. Coach K lives with his family in Durham, North Carolina. Jamie K. Spatola is a graduate of Duke University, where she majored in English. She is also one of Coach K's daughters.
Loading...
or
Not Currently Available for Direct Purchase