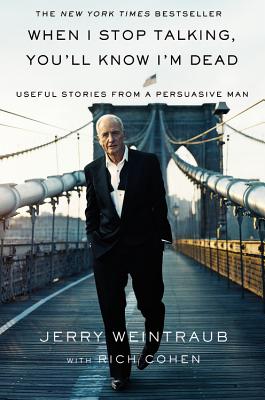 Useful Stories from a Persuasive Man

Here is the story of Jerry Weintraub: the self-made, Brooklyn-born, Bronx-raised impresario, Hollywood producer, legendary deal maker, and friend of politicians and stars. No matter where nature has placed him--the club rooms of Brooklyn, the Mafia dives of New York's Lower East Side, the wilds of Alaska, or the hills of Hollywood--he has found a way to put on a show and sell tickets at the door. "All life was a theater and I wanted to put it up on a stage," he writes. "I wanted to set the world under a marquee that read: 'Jerry Weintraub Presents.'"

In WHEN I STOP TALKING, YOU'LL KNOW I'M DEAD, we follow Weintraub from his first great success at age twenty-six with Elvis Presley, whom he took on the road with the help of Colonel Tom Parker; to the immortal days with Sinatra and Rat Pack glory; to his crowning hits as a movie producer, starting with Robert Altman and Nashville, continuing with Oh, God!, The Karate Kid movies, and Diner, among others, and summiting with Steven Soderbergh and Ocean's Eleven, Twelve, and Thirteen.

Along the way, we'll watch as Jerry moves from the poker tables of Palm Springs (the games went on for days), to the power rooms of Hollywood, to the halls of the White House, to Red Square in Moscow and the Great Palace in Beijing-all the while counseling potentates, poets, and kings, with clients and confidants like George Clooney, Bruce Willis, George H. W. Bush, Armand Hammer, Brad Pitt, Matt Damon, Bob Dylan, Led Zeppelin, John Denver, Bobby Fischer . . .well, the list goes on forever.

With wit, wisdom, and the cool confidence that has colored his remarkable career, Jerry chronicles a quintessentially American journey, one marked by luck, love, and improvisation. The stories he tells and the lessons we learn are essential, not just for those who love movies and music, but for businessmen, entrepreneurs, artists . . . everyone.


Praise For When I Stop Talking, You'll Know I'm Dead: Useful Stories from a Persuasive Man…

"Now, I could tell you stories about Jerry, but Jerry is the first and best to tell them. He's funny and grumpy and perfectly inappropriate. When it comes to work, nobody works harder. When it comes to charities, nobody guilts better. And when it comes to friendship, he has no peers. That's Jerry's great talent. He doesn't just light up a room, he lights it on fire. He's a great producer, a great organizer, a great friend, and truly the greatest showman on earth."
-George Clooney


"Edgy and honest but refreshingly spare in his criticism of stars, colleagues and family . . . With a bold voice, a storied career, and a cast of superstars, Weintraub's memoir makes a rousing insider tour of some five decades in the entertainment industry."
-Publisher's Weekly

"As the title of the book indicates, Weintraub loves to talk. And the 72-year-old impresario has some amazing stories to tell . . . All the stories are told in Weintraub's shooting-the-breeze voice. Credit for the easy-to-read style goes to Rich Cohen, a contributing editor at Vanity Fair magazine who turned Weintraub's tales into a breezy first-person narrative."
-Rick Warner, Bloomberg News

"It reads at times like a screenplay: a rags-to-riches tale complete with stunning reversals of fortune, punchy dialogue, and star cameos galore . . . Even the lows are enviable."
-Nathaniel Rich, VANITY FAIR

"Jerry has made a fascinating career for himself by finding ways to put on a show and sell tickets at the door. Jerry has bloomed wherever he's been planted. His life has put him in the company of greats like Elvis Presley, Frank Sinatra, The Rat Pack, Robert Altman, and Steven Soderbergh, to name a few. Jerry's story chronicles his journey that involved a lot of improvising, love, and of course, luck. This story isn't just for music or movie lovers, or entrepreneurs....it's for everyone. So, pick up your copy of When I Stop Talking, You'll Know I'm Dead by Jerry Weintraub... If there was a Mount Rushmore of legendary show business figures, he'd be one of them."
-Don Imus

"When I Stop Talking is anything but a rote, let-the-record-show memoir . . . Although it's packed with stories he's surely been telling at dinner forever, the book is also a modest set of guidelines for how you too can be a successful mogul . . . it's written with stealth and style, doubtless shaped by his co-writer, Rich Cohen . . . The book, really, is a performance, a monologue by a guy comfortable hanging with Armand Hammer at Leonid Brezhnev's funeral or with Joey Bishop at a deli. It's a show based on horse pucky on braggadocio."
-RJ Smith, LA Times

"This is a guy who can tell a story. And boy does he have stories to tell."
-People Magazine

"Weintraub knows a thing or two about placing bets. And his latest venture sounds like a sure thing-an autobiography, pithily titled When I Stop Talking, You'll Know I'm Dead: Useful Stories from a Persuasive Man . . . [it's] a gripping personal story."
-Entertainment Weekly

"Old chestnuts from this journey are lovingly, and often hilariously, burnished in Weintraub's new memoir, When I Stop Talking, You'll Know I'm Dead . . . The book, which is in no way a scandalous, showbiz tell-all, but a good-humored, and often self-deprecating romp of outrageous will and amazing fortune, also paints a picture of uncanny bliss."
-Nicole LaPorte, The Daily Beast

Jerry Weintraub has spent more than five decades in show business, in the process earning a reputation as one of the savviest negotiators, smartest producers, and shrewdest film investors of our time. He has been praised and honored for his philanthropic work and, as UNICEF's Man of the Year, was presented the organization's Danny Kaye Humanitarian Award.

Rich Cohen, a contributing editor at Vanity Fair and Rolling Stone, is the author of five books, including the bestsellers Tough Jews, The Avengers, and Israel Is Real. He lives in Connecticut with his wife, his dog, and many masculine children.
Loading...
or
Not Currently Available for Direct Purchase