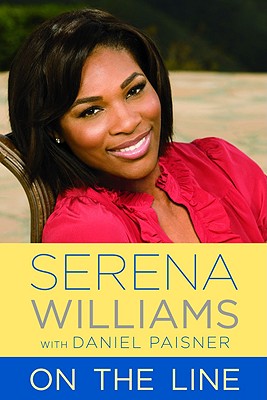 One of the biggest stars in tennis, Serena Williams has captured every major title. Her 2009 Australia Open championship earned her the #1 world ranking for the third time in her illustrious career - and marked only the latest exclamation point on a life well and purposefully lived. As a young girl, Serena began training with an adult-sized racquet that was almost as big as her. Rather than dropping the racquet, Serena saw it as a challenge to overcome-and she has confronted every obstacle on her path to success with the same unflagging spirit.

From growing up in the tough, hardscrabble neighborhood of Compton, California, to being trained by her father on public tennis courts littered with broken glass and drug paraphernalia, to becoming the top women's player in the world, Serena has proven to be an inspiration to her legions of fans both young and old. Her accomplishments have not been without struggle: being derailed by injury, devastated by the tragic shooting of her older sister, and criticized for her unorthodox approach to tennis.

Yet somehow, Serena always manages to prevail. Both on the court and off, she's applied the strength and determination that helped her to become a champion to successful pursuits in philanthropy, fashion, television and film. In this compelling and poignant memoir, Serena takes an empowering look at her extraordinary life and what is still to come.

Praise For On the Line…

"From the first time I met her, to watching her capture the US Open, Serena has always amazed me with her ability on the court, her curiosity away from it and her overall love for life. Serena Williams is taking her life to an all new level."
—Billie Jean King, -

"On the court, Serena is the most challenging opponent I've come up against, and off the court, she is a loving sister and a true friend. Serena has been a role model for me and an inspiration. It is difficult to imagine how I would have achieved many of my greatest accomplishments without her in my life."
—Venus Williams, -

"Serena has dredged deeply into her emotions and those of the First Family of tennis-hopes and fears, aches and triumphs-to craft an exceptional memoir. Ascending from nowhere to the top of the world, she has run an exciting zig-zag course transforming darkest days into bright victories on her way to the International Tennis Hall of Fame."
—Bud Collins, -

Serena Williams is one of the top athletes in tennis and in all of sports. At the age of 27, she has captured every major title. Growing up in Compton, CA, she was trained by her father on the public tennis courts before rising up the tennis ranks. Serena has wide-ranging interests aside from tennis, including starting her own fashion line and opening a school for children in Africa.

Daniel Paisner is the author or co-author of more than forty books. He has collaborated on seven New York Times best-selling titles, including Denzel Washington's A Hand to Guide Me, Whoopi Goldberg's Book and Geraldo Rivera's Exposing Myself. He lives in Port Washington, NY.