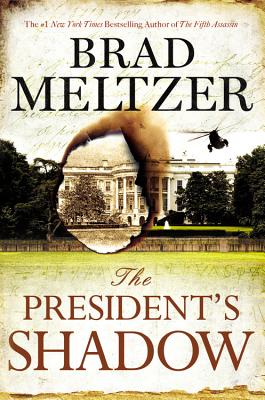 A severed arm, found buried in the White House Rose Garden.
A lethal message with terrible consequences for the Presidency.
And a hidden secret in one family's past that will have repercussions for the entire nation.
Following The Inner Circle and The Fifth Assassin, #1 bestselling author Brad Meltzer returns with . . .
The President's Shadow
There are stories no one knows. Hidden stories. I find those stories for a living.
To most, it looks like Beecher White has an ordinary job. A young staffer with the National Archives in Washington, D.C., he's responsible for safekeeping the government's most important documents . . . and, sometimes, its most closely held secrets.
But there are a powerful few who know his other role. Beecher is a member of the Culper Ring, a 200-year-old secret society founded by George Washington and charged with protecting the Presidency. Now the current occupant of the White House needs the Culper Ring's help. The alarming discovery of the buried arm has the President's team in a rightful panic. Who buried the arm? How did they get past White House security? And most important: What's the message hidden in the arm's closed fist? Indeed, the puzzle inside has a clear intended recipient, and it isn't the President. It's Beecher, himself.
Beecher's investigation will take him back to one of our country's greatest secrets and point him toward the long, carefully hidden truth about the most shocking history of all: family history.

Praise For The President's Shadow (The Culper Ring Series #2)…

"The twists and turns...will keep even the most jaded reader up all night...Meltzer blends history into the story line, and a good portion of it is insider knowledge, giving authenticity to the conspiracy that is slowly unveiled. This is the third thriller to feature White, and it's a perfect cap to an amazing trilogy."—Associated Press

"Numerous plot strands, multiple narrative perspectives, divided loyalties, a Devil's Island labor-camp nightmare from the past, and a psychotic killer add up to another chilling adventure from plotmaster Meltzer. A strong addition to the genre and a sure bet for the David Baldacci and James Grippando set, this is a high-energy page-turner, full of shocking violence and unrelenting peril: a stay-up-all-night nail-biter."—Booklist

"A taut political conspiracy thriller... Readers will find it difficult to put this quick-paced page-turner down as they get pulled into the maze of deceit, intrigue, and conspiracy."—Library Journal

"The author of DC's best thrillers."—Washingtonian

"Energetic storytelling...keeps the reader's interest. Meltzer sprinkles little-known tidbits about U.S. and presidential history throughout. Nothing seems too farfetched...because even the most outlandish detail is based on fact....THE PRESIDENT'S SHADOW is a welcome return to Meltzer's thriller roots."—Sun-Sentinel (FL)

"Fans of historical conspiracy fiction will find a lot to like."—Publishers Weekly

"[Meltzer] is an architect. His structures are towering , intricate, elegant, and surprising -- but always grounded in humanity and logic."—Joss Whedon
or
Not Currently Available for Direct Purchase
Copyright © 2020 American Booksellers Association