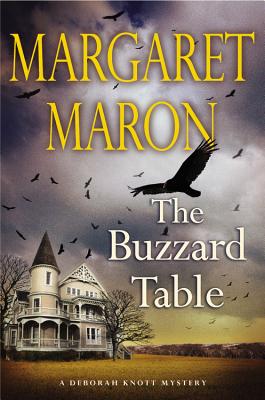 Judge Deborah Knott and her husband, Sheriff's Deputy Dwight Bryant, are back home in Colleton County amid family and old friends. But the winter winds have blown in several new faces as well. Lt. Sigrid Harald and her mother, Anne, a well-known photographer, are down from New York to visit Mrs. Lattimore, Anne's dying mother. When the group gathers for dinner at Mrs. Lattimore's Victorian home, they meet the enigmatic Martin Crawford, an ornithologist researching a book on Southern vultures. He's also Mrs. Lattimore's long-lost nephew. With her health in decline, Mrs. Lattimore wants to make amends with her family-a desire Deborah can understand, as she, too, works to strengthen her relationship with her young stepson, Cal.

Anne is charmed by her mysterious cousin, but she cannot shake the feeling that there is something familiar about Martin . . . something he doesn't want her or anyone else to discover. When a string of suspicious murders sets Colleton County on edge, Deborah, Dwight, and Sigrid once again work together to catch a killer, uncovering long-buried family secrets along the way.

MARGARET MARON grew up in the country near Raleigh, North Carolina, but for many years lived in Brooklyn, New York. When she and her artist husband returned to the farm that had been in her family for a hundred years, she began a series based on her own background. The first book, Bootlegger's Daughter, became a Washington Post bestseller that swept the major mystery awards for its year-winning the Edgar, Agatha, Anthony, and Macavity Awards for Best Novel-and is among the 100 Favorite Mysteries of the Century as selected by the Independent Mystery Booksellers Association. Later Deborah Knott novels Up Jumps the Devil, Storm Track, and Three-Day Town each also won the Agatha Award for Best Novel. Margaret is also the author of the Sigrid Harald series of detective novels. In 2008, Maron received the North Carolina Award for Literature, the highest civilian honor the state bestows on its authors. And in 2013, the Mystery Writers of America celebrated Maron's contributions to the mystery genre by naming her a Grand Master-an honor first bestowed on Agatha Christie. To find out more about her, you can visit MargaretMaron.com.

Praise For The Buzzard Table (A Deborah Knott Mystery #18)…

"Maron is at the top of her form"—Our State Magazine

"As always, Maron skillfully layers an absorbing plot with the doings of Deborah's large extended family and the domestic details of their semirural lifestyle. In addition, the contrast between Deborah, who is warm and caring, and Sigrid, who is reserved and cerebral, gives Maron's tale added depth."—Booklist

"In Maron's intriguing 18th Deborah Knott mystery...Maron successfully combine a look at family foibles and relationships with a series of moral choices that challenges the characters' sense of law and justice."—Publishers Weekly

"This book has plenty of suspense and the characters are well done. One of Ms. Maron's strengths is the believability of her characters. They add to the story and don't distract the reader with useless red herrings. As usual, the interplay between Dwight and Deborah is wonderfully romantic even in the midst of a murder. I have to say that I will be glad to see them back home in the next book. I just love the family dynamics and the southern ambiance in these books. Can't wait for the next book in the series!!"—imainlinefiction.blogspot.com on THREE-DAY TOWN

"Dwight's obsession with New York gourmet delights and Deborah's passion for stylish, impractical footwear are charming, but Sigrid's slow but steady police work carries the day. Fans who have hankered for Deborah and Sigrid to find themselves in the same story will be charmed."—Kirkus on THREE-DAY TOWN

"This is a strong addition to a series that's won Edgar, Agatha, Anthony, and Macavity awards."—Publishers Weekly on THREE-DAY TOWN

"[Maron] plots like a modern-day Christie, but the North Carolina charm is all her own."—Kirkus on CHRISTMAS MOURNING

"Warm and authentic family relationships are the heart of this evergreen series."—Publishers Weekly on CHRISTMAS MOURNING

"[A] winning entry and a fine holiday mystery."—Booklist on CHRISTMAS MOURNING

"Every Margaret Maron is a celebration of something remarkable."—New York Times Book Review
or
Buy Here
Copyright © 2020 American Booksellers Association