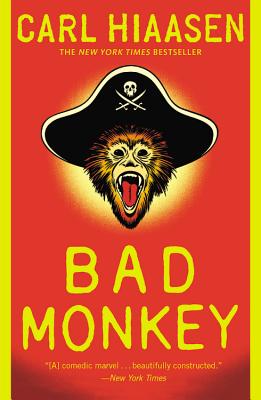 Andrew Yancy-late of the Miami Police and soon-to-be-late of the Monroe County sheriff's office-has a human arm in his freezer. There's a logical (Hiaasenian) explanation for that, but not for how and why it parted from its shadowy owner. Yancy thinks the boating-accident/shark-luncheon explanation is full of holes, and if he can prove murder, the sheriff might rescue him from his grisly Health Inspector gig (it's not called the roach patrol for nothing). But first-this being Hiaasen country-Yancy must negotiate an obstacle course of wildly unpredictable events with a crew of even more wildly unpredictable characters, including his just-ex lover, a hot-blooded fugitive from Kansas; the twitchy widow of the frozen arm; two avariciously optimistic real-estate speculators; the Bahamian voodoo witch known as the Dragon Queen, whose suitors are blinded unto death by her peculiar charms; Yancy's new true love, a kinky coroner; and the eponymous bad monkey-who just may be one of Carl Hiaasen's greatest characters.

Carl Hiaasen was born and raised in Florida. He is the author of nine previous novels. He also writes a twice-weekly metropolitan column for The Miami Herald.

"[A] deliciously zany romp. Buckle up for the ride."—People

"Bad Monkey boils over with corruption and comeuppance. And yes, there's a monkey."—O, The Oprah Magazine

"[A] rollicking misadventure in the colorful annals of greed and corruption in South Florida. . . . Hiaasen has a peculiar genius for inventing grotesque creatures . . . that spring from the darkest impulses of the id. But he also writes great heroes."—Marilyn Stasio, The New York Times

"This 'Triple-F'-fierce, funny, and Floridian . . . enfolds corruption, greed, mayhem, and very funny social satire in the way that only Hiaasen does it."—Reader's Digest

"[Hiaasen is] one of America's premier humorists."—Rege Behe, Pittsburg Tribune-Review

"No one writes about Florida with a more wicked sense of humor than Hiaasen."—Jocelyn McClurg, USA Today