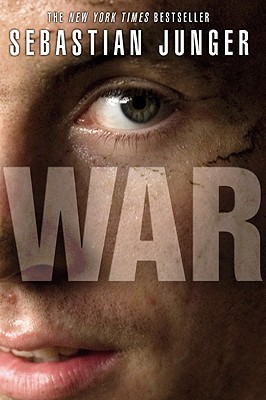 In his breakout bestseller, The Perfect Storm, Sebastian Junger created "a wild ride that brilliantly captures the awesome power of the raging sea and the often futile attempts of humans to withstand it" (Los Angeles Times Book Review).

Now, Junger turns his brilliant and empathetic eye to the reality of combat--the fear, the honor, and the trust among men in an extreme situation whose survival depends on their absolute commitment to one another. His on-the-ground account follows a single platoon through a 15-month tour of duty in the most dangerous outpost in Afghanistan's Korengal Valley. Through the experiences of these young men at war, he shows what it means to fight, to serve, and to face down mortal danger on a daily basis.

Riveting . . . Junger experiences everything [the soldiers] do-nerve-racking patrols, terrifying roadside bombings and ambushes, stultifying weeks in camp when they long for a firefight to relieve the tedium. Despite the stress and the grief when buddies die, the author finds war to be something of an exalted state: soldiers experience an almost sexual thrill in the excitement of a firefight-a response Junger struggles to understand-and a profound sense of commitment to subordinating their self-interests to the good of the unit. Junger mixes visceral combat scenes-raptly aware of his own fear and exhaustion-with quieter reportage and insightful discussions of the physiology, social psychology, and even genetics of soldiering. The result is an unforgettable portrait of men under fire.—Publishers Weekly

The latest flexing of journalistic muscle from Vanity Fair contributor Junger . . . The author dives into the most perilous form of immersion journalism, attempting to create an unflinching account of frontline combat. The prototype of this approach is Michael Herr's peerless Dispatches (1977), a thoroughly unsentimental, grunt-level view of the Vietnam War's bloodiest years. Yet if Junger's dispatches from the fighting in Afghanistan solidify anything, it's that war American-style hasn't evolved much in the decades since Herr's book . . . As in The Perfect Storm (1997), Junger blends popular science, psychology and history with a breathlessly paced narrative . . . Harrowing.—Kirkus

Sebastian Junger is the New York Times bestselling author of The Perfect Storm and A Death in Belmont. He is a contributing editor to Vanity Fair, and has been awarded a National Magazine Award and an SAIS Novartis Prize for journalism. He lives in New York City.