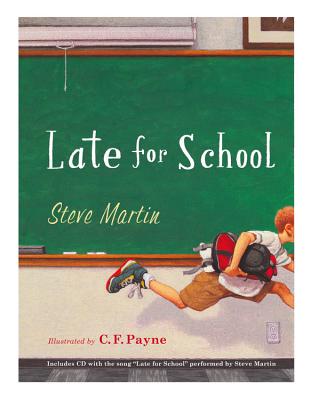 “This kid woke up late, and now it's time for a mad dash to make it to school in the nick of time! He sprints out the front door, leaps over the fence, bounces off the neighbor's diving board, and grabs hold of a kite that is conveniently floating by! He's so focused on getting to class on time, he doesn't even notice the silence that greets him as he flies through the front door of school. Suddenly, our hero realizes--it's Saturday! From comedy legend Steve Martin comes a rollicking romp that will delight young readers. The lyrical rhyme of Martin's story is matched beautifully by C.F. Payne's energetic, movement-inspired illustrations. Kids will love this hilarious tale--and the original song included on CD!”
— Megan Graves, Hooray for Books!, Alexandria, VA
View the List

Getting to school has never been quite this difficult--or hilarious. Celebrated writer and performer Steve Martin and dynamic artist C. F. Payne (illustrator of John Lithgow's children's books) have teamed up to tell a story of the adventure, danger, and laughs of the journey to school. Enclosed with the book is a CD of Martin on banjo and vocals, singing the book's story with a bluegrass twist.

Undoubtedly a new classic for readers of all ages, Late to School is the perfect gift to be read--and listened to--again and again.

He's won Emmys for his television writing and two Grammys for comedy albums. In addition to a play, Picasso at the Lapin Agile, he has written a bestselling collection of comic pieces, Pure Drivel, and a bestselling novella, Shopgirl, which was made into a movie. His work appears frequently in The New Yorker and The New York Times.
or
Not Currently Available for Direct Purchase
Copyright © 2020 American Booksellers Association