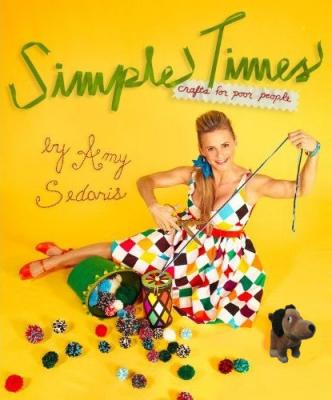 It's often been said that ugly people craft and attractive people have sex. In Simple Times, Amy Sedaris sets the record straight and delivers a book that will forever change the world of crafting. Demonstrating that crafting is one of life's more pleasurable and constructive leisure activities, Sedaris shows that anyone with a couple of hours to kill and access to pipe cleaners can join the elite society of crafters.

You will discover how to make popular crafts such as Pompom Ringworms and Seashell Toilet Seat Covers, all while avoiding the most common crafting accidents (sawdust fires, feather asphyxia, pine cone lodged in throat). You will cook your own edible crafts, from a Crafty Candle Salad to Sugar Skulls, with many more recipes and craft ideas that will inspire you to create your very own hastily constructed obscure d'arts.

Praise for Simple Times
"Amy Sedaris is a kookier, kitschier version of Martha Stewart...Simple Times is an ideal gift for the crafter who has crafted everything." - Associated Press

"For anyone who's ever collected hats crocheted together...or simply for fans of Amy Sedaris and her idiosyncratic sense of humor." -- New York Times Book Review

Sedaris often defies description. So does her book, SIMPLE TIMES, a hyperkinetic hodgepodge of "Crafts for Poor People" celebrating traditional American handicrafts, as well as diversions like keeping pet rabbits and making mint juleps. ...the book's sheer visual exuberance and wide scope make it obvious that Sedaris is a dedicated follower of the pipe-cleaner arts. While SIMPLE TIMES may not be for the dour D.I.Y.-er to whom crafting is a competitive sport, it has strong potential as a gift for anyone who's ever collected hats crocheted together, or Barbie dolls in knitted antebellum dresses designed to cover an extra roll of toilet paper - or simply for fans of Amy Sedaris and her idiosyncratic sense of humor.
—The New York Times Book Review

"If there was any doubt that Amy Sedaris is a kookier, kitschier version of Martha Stewart in the four years since the release of her best-selling, "I Like You: Hospitality Under the Influence," get out your Popsicle sticks, toupee tape and clamshells. Sedaris proves her place as a domestic maven for today's irony-loving do-it-yourselfers with her latest book. "Simple Times" is steeped in '70s campiness, with a youthful, can-do attitude walking through an extensive list of projects, neatly indexed in the back, from Acorn Crafts to Macaroni Alien Mask and Yesterday's Newspaper Scuffs. "Simple Times" is an ideal gift for the crafter who has crafted everything."
—The Associated Press

"The funny new book we're loving . . . Had us cracking up from the first page . . .The entire guide is written in that laugh-out-loud style, making it a fun read even for those who have no interest in crafting. But for people who are into crafting, the book is a gold mine of ideas."—Cosmopolitan.com

"Will leave readers in stitches . . . Her hilarious and hilariously illustrated guide has sections on crafting while angry, crafting for the criminally insane and crafting while amped up on amphetamines."
—The Boston Herald

"In step with her hilarious how-to debut . . . provides a jolt of laughter that anyone can use in simple times like these."
—Instinct Magazine

"In this laugh-out-loud book, Amy Sedaris, one of the funniest humans on the planet, confronts the hard-hitting craft questions that other books refuse to even acknowledge . . . With the hectic holiday season almost upon us, this nifty book could be your lifeboat to sanity, or maybe not. Regardless, it is fun and every bit as amusing as Amy's previous bestseller."
—The Tucson Citizen

"Hip and hilarious."
—The Buffalo News

"Just like her previous book, "Times" is colorful and instantly funny. It's perhaps the only book you'll ever read with tips on how to make both good love and good sausage. Separately, of course."
—The News & Observer (NC)

"Amy Sedaris proves she has her finger on the pulse of the domestic-arts world - especially for those on a budget- with her latest book . . . it's vintage Sedaris, combining sweet intentions with gross-out humor."
—Madison.com

"A subversive, hilarious take on the made-by-hand movement."
—The Orlando Sentinel

Amy Sedaris has appeared in several movies and television shows, and, with Paul Dinello and Stephen Colbert, is a co-author of the novel Wigfield. She also co-wrote Strangers with Candy, the hit show on Comedy Central. She lives in Manhattan.
Loading...
or
Not Currently Available for Direct Purchase