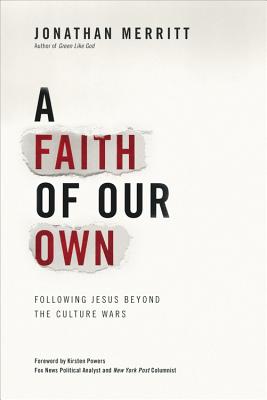 A Faith of Our Own

Following Jesus Beyond the Culture Wars

Every day, major headlines tell the story of how Christianity is attempting to influence American culture and politics. But statistics show that young Americans are disenchanted with a faith that has become culturally antagonistic and too closely aligned with partisan politics. In this personal yet practical work, Jonathan Merritt uncovers the changing face of American Christianity by uniquely examining the coming of age of a new generation of Christians.

Jonathan Merritt illuminates the spiritual ethos of this new generation of believers who engage the world with Christ-centered faith but an un-polarized political perspective. Through personal stories and biblically rooted commentary this scion of a leading evangelical family takes a close, thoughtful look at the changing religious and political environment, addressing such divisive issues as abortion, gay marriage, environmental use and care, race, war, poverty, and the imbalance of world wealth. Through Scripture, the examples of Jesus, and personal defining faith experiences, he distills the essential truths at the core of a Christian faith that is now just coming of age.

Praise For A Faith of Our Own: Following Jesus Beyond the Culture Wars…

"The story of Merritt's exit from a hard-edged political movement to a more centrist, more complex political place is a potent and timely symbol of the jourenys of m any young American evangelicals."—Dan Gilgoff, CNN.com Religion Editor

"In this personal, provocative, and well-written book- part memoir, part manifesto- Merritt lays out his journey and his case. If you want to understand shifts among younger Christians, this book is a must read."—Ed Stetzer, President of LifeWay Research

"Merritt's powerful and faith-driven ideas should come as a healthy shock to many Christians."—Library Journal, on Green Like God

"The more people who read Merritt's book, the better."—Books and Culture, on Green Like God

"Himself a convert to the idea of God as green, Merritt is sure to appeal to the hearts of even the most polarized Christians. His guide could be turned into relevant sermon material and should be mandatory reading for churchgoers."—Publishers Weekly, on Green Like God

"Merritt...writes with humility and clarity. He addresses the political, cultural and biblical assumptions many of us hold."—Christianity Today

"Merritt's conversion may not change the world quite as much as Paul's, but he has transformed his classroom epiphany into topic A within...the biggest Protestant body in the U.S."
—TIME Magazine

"You can't serve both God's Kingdom and an earthly one. In this book, Jonathan Merritt forces the reader to 'choose this day whom you will serve.'"—- Cal Thomas, syndicated and USA Today columnist / Fox News contributor

Jonathan Merritt is a faith and culture writer who has published over 350 articles in outlets such as USA Today, The Christian Science Monitor, CNN.comand Christianity Today. He is author of Green Like God: Unlocking the Divine Plan for Our Planet, which Publisher's Weekly called "mandatory reading for churchgoers." As a respected Christian voice, he has been interviewed by ABC World News, CNN, Fox News, NPR, PBS, The New York Times, and The Washington Post. Jonathan resides outside of Atlanta, GA where he actively serves and teaches at Cross Pointe Church.