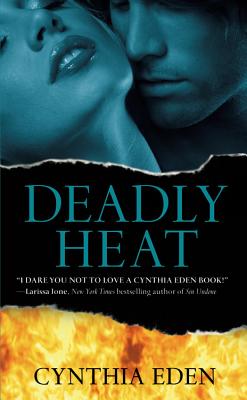 Six months after her lover died in an arsonist's blaze, firefighter Lora Spade calls in the FBI's elite Serial Services Division to track the elusive killer. When Special Agent Kenton Lake is lured into a violent inferno, Lora pulls him to safety and is stunned - not by the fire, but by her own searing attraction to Kent. For the first time in months, she longs for something other than vengeance.

Kenton's interest in Lora should be purely professional. But one fleeting kiss and he can't get her out of his mind. Her combination of strength and vulnerability makes him want to protect her, and that means solving this case - and fast. For even the passion igniting between them can't hide a terrifying truth: Lora is the next target in a murderer's sadistic, fiery game.

"When the suspense is just as hot and just as dynamic as the romance, well then you have a winning combination. Cynthia Eden delivers on all counts."
—Heart to Heart: The B&N Romance Blog

"Eden has written such an intricate web of suspense, the reader will be lead at a highly charged pace until the climactic ending. Highly Recommend!"—RomanceReadersConnection.com on Deadly Fear

"It's a good read for passing the day away, but avoid the nights, you might be afraid to sleep."—RomanceReviewsToday.com on Deadly Fear

"With lots of twists and turns and close calls, Deadly Fear is romantic suspense at its best!"—TheRomanceStudio.com on Deadly Fear

"With a perfect blend of romance and suspense, this book will have you dying to turn the page."—Kelly Moran, AuthorKellyMoran.blogspot.com on Deadly Fear