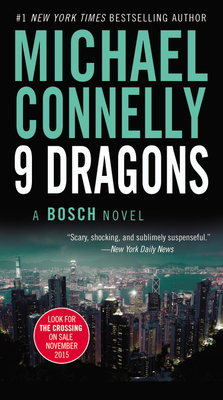 After what seems like a routine murder investigation, LAPD Detective Harry Bosch finds himself in Hong Kong facing the highest-stakes case of his life: bringing his kidnapped daughter home.
Harry Bosch is assigned a homicide call in South L.A. that takes him to Fortune Liquors, where the Chinese owner has been shot to death behind the counter in an apparent robbery.

Joined by members of the department's Asian Crime Unit, Bosch relentlessly investigates the killing and soon identifies a suspect, a Los Angeles member of a Hong Kong triad. But before Harry can close in, he gets the word that his young daughter Maddie, who lives in Hong Kong with her mother, is missing.

Bosch drops everything to journey across the Pacific to find his daughter. Could her disappearance and the case be connected? With the stakes of the investigation so high and so personal, Bosch is up against the clock in a new city, where nothing is at it seems.

"If at first encounter Connelly seems primarily an exceptionally accomplished writer of crime novels, at closer examination he is also a mordant and knowing chronicler of the world in which crime takes place, i.e., our world."—Washington Post

"Harry Bosch [is] Connelly's usual hero and one of the great figures in contemporary crime fiction."—Los Angeles Times

"Though Connelly remains a master at detailing the intricacies of 'the job,' it is Harry's longing for reunion and connection with his ex-wife and daughter, the overwhelming vulnerability he feels as a father, that makes Nine Dragons another standout in the series that should satisfy all readers, whether they are new to Boschworld, occasional visitors or devoted denizens."
—Los Angeles Times

"With Nine Dragons, Connelly has taken a chance by transforming a character millions have come to know well. In doing so, he has made Harry Bosch more human and interesting than ever."
—San Francisco Examiner

"The Bosch revealed in Nine Dragons is vulnerable, a twist that makes him both deeper and more human...What remains most interesting is the new dimension added to the character - a man who has evolved over the series of 15 novels to become ever more interesting and real."
—Denver Post