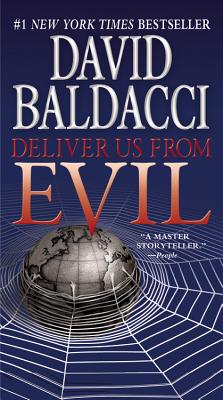 Deliver Us from Evil (A Shaw Series)

Locked in a battle of nerve and wits, a mysterious intelligence operative and a vigilante agent race against time to take down a greedy businessman bent on destroying millions of lives in this #1 New York Times bestselling thriller.

He has built a fortune from his willingness to buy and sell anything . . . and anyone. In search of new opportunities, Waller has just begun a new business venture: one that could lead to millions of deaths all over the globe. On his trail is Shaw, the mysterious operative from The Whole Truth, who has tracked Waller to Provence and must prevent him from closing his latest deal. But someone else is pursuing Waller: Reggie Campion, an agent for a secret vigilante group headquartered in a musty old English estate—and she has an agenda of her own.

Hunting the same man and unaware of each other's mission, Shaw and Reggie will be caught in a deadly duel of nerves and wits. Hitchcockian in its intimate buildup of suspense and filled with the remarkable characters, breathtaking plot turns, and blockbuster finale that are David Baldacci's hallmarks, Deliver Us From Evil is one of the most gripping thrillers you'll read this year.

Praise For Deliver Us from Evil (A Shaw Series)…

"A very clever novel...full marks go to Baldacci for pulling off an especially difficult type of story."
—Booklist

"Plenty of thrills...an engrossing novel with a good balance of characterization, plot, and atmospherics, all wrapped up with the usual thriller pace and action."
—reviewingtheevidence.com

"A fast-paced thriller with action that takes place around the world...The novel builds up the suspense from the first page to the last one."
—Frontlist.com

David Baldacci is a global #1 bestselling author, and one of the world's favorite storytellers. His books are published in more than forty-five languages and eighty countries, with 150 million copies sold worldwide. His works have been adapted for both feature film and television. David Baldacci is also the cofounder, along with his wife, of the Wish You Well Foundation, a nonprofit organization dedicated to supporting literacy efforts across America. Still a resident of his native Virginia, he invites you to visit him at DavidBaldacci.com and his foundation at WishYouWellFoundation.org.
Loading...
or support indie stores by buying on