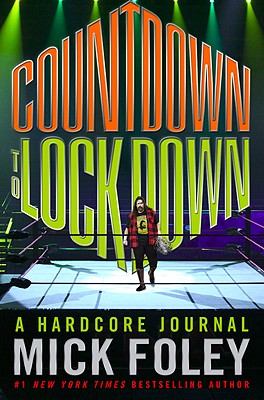 The undisputed king of the literary ring is back with another handwritten, hardcore home run. Forget the ghost writer and the computer keyboard - this mesmerizing memoir is straight from the pen and notebook paper of the Hardcore Legend, Mick Foley, chronicling the heart-pounding build-up to "Lockdown", one of the most important matches of his long and storied career. Foley's every limit is tested, as he battles back the formidable tag-team of Father Time and Mother Nature - overcoming a host of injuries and serious self-doubts to get back in the ring with one of his all-time favorite foes. With his trademark blend of wit and wisdom, wildness and warmth, Foley dishes previously untold stories from his remarkable life, including his transition from WWE to TNA, his ill-fated stint as a television commentator, his tumultuous relationship with Vince McMahon, his thoughts on performance enhancing substances in sports, the troubling list of wrestlers dying way too young, and his soul saving work in Sierra Leone.

Raw, dynamic, and unabashedly honest, COUNTDOWN TO LOCKDOWN charts Foley's wrestling rebirth, and rise to heights that his fans thought he would never see again.

Publisher's Note: 100% of the advance for this book has been donated to Child Fund International and RAINN.

Praise For Countdown to Lockdown: A Hardcore Journal…

"Mick Foley is a natural born storyteller whose sense of humor and sensibilities regarding life are a joy to experience. This hilarious, often poignant, vividly written true story is an amazingly honest journey that any fan of pop culture, sports, family values, battling Father Time, helping others, and, obviously, pro wrestling past or present, will love. I read Mick's latest literary effort twice in three days and am anxious to start the process all over again."
---Jim "JR" Ross, Hall of Fame wrestling announcer

"Mick Foley is like the two sides of a coin. Both a hardcore wrestling legend and a smart, caring author-Mick's intelligence makes him lethal in the ring and his wrestling intensity makes him a deadly writer. Countdown to Lockdown applies a "Mandible Claw" to every page!"
---Dee Snider, Twisted Sister frontman

"Like a trusted bard of old, Mick Foley is a masterful storyteller whose tales are guaranteed to engage and entertain."
---Chris Jericho, New York Times bestselling author

Mick Foley is the author of the genre defining #1 New York Times best-sellers Have a Nice Day and Foley is Good, as well as three children's books and two novels. Foley began wrestling professionally in 1985, and is a four-time world champion. He has sponsored children for eighteen years with Child Fund International, and is a weekly volunteer in RAINN's fight against sexual violence. He lives with his wife and four children on Long Island.
Loading...
or
Not Currently Available for Direct Purchase