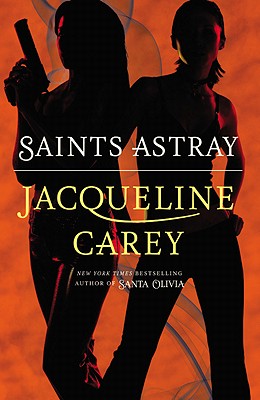 Post-apocalyptic scifi meets urban fantasy in Jacqueline Carey's sequel to Santa Olivia as two girls fight to stay together and change the world.

After their escape from military custody, Loup Garron and her girlfriend Pilar have a chance to reinvent their lives thousands of miles away from the forgotten and disenfranchised Texas border town and military zone of Santa Olivia.

Thanks to Loup's genetically engineered gifts of strength, speed, and an innate fearlessness, as well as Pilar's unexpected skill with a pistol, they find new careers as high-priced bodyguards for a world famous British rock band. Back in the States, an investigation into the existence of Santa Olivia, also known as Outpost 12, begins in Washington, D.C. When the key witness with evidence to expose the military cover-up, their old comrade Miguel, vanishes, the case seems lost.

The abandoned citizens of Santa Olivia need a champion, a voice raised on their behalf, which pushes Loup and Pilar into a hard choice. If Loup returns to U.S. soil, she'll be an outlaw. If she's caught, she'll be taken into custody again; and this time, there may be no escape. But if she and Pilar don't fight for the freedom of those they left behind, no one will.

PRAISE FOR SANTA OLIVIA
"Terrific... a deep piece of literature that left me breathless and cheering. Kudos to Ms. Carey." -- Patricia Briggs, #1 New York Times bestselling author
"Santa Olivia draws you in... daring you not to turn away as you are captivated by every single page. A fabulous read into the paranormal as only Carey can deliver!" -- L.A. Banks, author of The Vampire Huntress Legends series