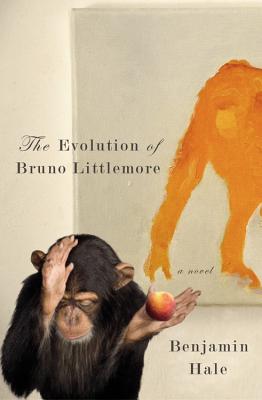 The Evolution of Bruno Littlemore


Praise For The Evolution of Bruno Littlemore…

In this account by a chimpanzee who ascends the evolutionary ladder, first-novelist Hale explores what it means to be human. Nine years into captivity after committing a murder, Bruno-24 years old, hairless, with his spine straightened by bipedal standing, and his surgically fashioned, humanoid nose-dictates his memoirs, having become proficient at speech, reading, and visual arts. His first name was given to him at Chicago's Lincoln Park Zoo where he was born, his second is taken by him from researcher Dr. Lydia Littlemore, who tests him and with whom he comes to share a home and a deep, and eventually sexual, love. Motivated by his love for Lydia and language, Bruno soon lives and functions as a human, becoming an assault on those who consider humans unique, and his blissful relationship with Lydia spawns hatred. Like his protagonist, Hale clearly loves language, using words with precision (likely to send readers to a dictionary) and for play, as when Lydia, when happy, "chortled up the engine" to start her car. With its exuberantly detailed sex between species and its concept that human cognizance of death leads to superstition and religion, this novel is likely to offend some readers, while others will find it holds a remarkable, riotous mirror to mankind.
-Booklist (Starred Review)

"It may take a million monkeys clacking into infinity on a million Remingtons to re-create the works of Shakespeare, but it takes only one literate, hyperintelligent chimpanzee to narrate The Evolution of Bruno Littlemore, a stunning debut novel . . . Making your main character a talking ape - and one who engages in a romantic liaison with a human being, no less - is ambitious, to say the least. But from the first page, it is clear that Bruno is more than mere literary gimmickry; he is fascinating and fully formed. You learn as much by what he withholds as by what he provides, and he withholds a lot. Since he's a defensive and unreliable narrator with an unorthodox sexual predilection, the easy comparison point for Bruno is Lolita's Humbert Humbert, but he calls to mind that book's author just as readily. Like Nabokov, he is a late adopter of English who throws himself wholly into the language, exploring its less-visited gems - from ''ort'' to ''trichotillomania'' - and obsessing over syntax and signifiers . . . Where the novel should be offensive, it is often tender, and where it should be risible, it is genuinely funny. . . Despite his unlikely erudition, Bruno is by turns fragile, mercurial, spiteful, narcissistic, and lost. All of which, even more than his gift of speech, just makes him that much more human."
-Entertainment Weekly

"Hale's novel is so stuffed with allusions high and low, so rich with philosophical interest, that a reviewer risks making it sound ponderous or unwelcoming. So let's get this out of the way: THE EVOLUTION OF BRUNO LITTLEMORE is an absolute pleasure. Much of the pleasure comes from the book's voice . . . There is a Bellovian exhuberance befitting a Chicago-born autodidact . . . There's also great pleasure in the audacity of the story itself. THE EVOLUTION OF BRUNO LITTLEMORE announces that Benjamin Hale is himself a fully evolved as a writer, taking on big themes, intent on fitting the world into his work. Hale's daring is most obvious in his portrayal of the relationship between Bruno and Lydia, which eventually breaks the one sexual taboo even Nabokov wouldn't touch . . . Ultimately the point of these scenes is not to shock us but to ask what fundamentally makes us human, what differences inhere between a creature like Lydia and a creature like Bruno that disqualify the latter from the full range of human affection."
-New York Times Book Review

"One very evolved human, Benjamin Hale has evoked, in his first novel, the miracle of Bruno Littlemore, the world's first talking chimpanzee . . .This chimp not only speaks English, he's as sensitive and charming, as brilliant and learned, as any human alive . . . One need only read a few pages to be swept up by the grandeur of Hale's ebullient prose . . . It's Bruno's distinct voice, more than debating points, that wins us over . . . With his primary Chicago setting, engrossing storytelling, unabashed braininess, prediliction for eccentric characters, and long, looping, wonderfully evocative sentences, Hale reminds me of no writer so much as Saul Bellow. But he's got a bold, rick-taking, off-center view of the world all his own . . Adventure tale, love story, science fiction, novel of ideas - this one's got it all."
-Newsday

"Bruno Littlemore is one of the most outrageous, vivid characters to populate a page in American fiction in a long time. . . . It's not only a roaring good tale, it's a wonderful musing on the nature of humanness and our relationship to the other species with which we share the planet . . . Hale's sense of humor is often ribald, and the human characters Bruno encounters during his adventures are richly drawn and often eccentric. The descriptions are clearly informed by a deep fondness, and that is the overriding tone of Bruno's narrative: love."
-The Baton Rouge Advocate

"Imagine, for a moment, a future in which animals are accorded the same rights as humans, a society in which cattle ranchers, research scientists and pet owners are regarded with an antipathy we now reserve for eugenicists and slave traders. In the graduate literature seminars of this future, Benjamin Hale's debut novel, "The Evolution of Bruno Littlemore," would be hailed as a brave and visionary work of genius . . . This interspecies coming-of-age story - in which a chimpanzee acquires language and attempts to make his way through human society - would be taught alongside "Animal Farm," the works of Temple Grandin and JM Coetzee's Elizabeth Costello. For readers of the present day, THE EVOLUTION OF BRUNO LITTLEMORE offers a touching and quirky story of identity formation, a brash, glittering, engaging yarn that pushes past opposable thumbs, universal grammar and bipedal ambulation to the pulsing heart of our fair species. The novel's narrator and semi-reluctant hero announces himself with a flourish . . . Erudite and affected, bitter, brilliant and lonely, Bruno's narrative voice self-consciously echoes many of the 20th century's most memorable narrators . . . THE EVOLUTION OF BRUNO LITTLEMORE is a major accomplishment. A lively page-turner that asks the big questions head on and doesn't shy away from controversy, Hale's first novel is a noisy, audacious and promising debut."
-San Francisco Chronicle

"We've finally got a book to screech and howl about. Benjamin Hale's audacious first novel, "The Evolution of Bruno Littlemore," is a tragicomedy that makes you want to jump up on the furniture and beat your chest . . . "The Evolution of Bruno Littlemore" is a brilliant, unruly brute of a book - the kind of thing Richard Powers might write while pumped up on laughing gas . . . When the novel's antics aren't making you giggle, its pathos is making you cry, and its existential predicament is always making you think. No trip to the zoo, western Africa or even the mirror will ever be the same . . . funny, sad and shocking . . . extraordinary intellectual range. . . But just when you want to stuff this chimp back in his cage, he comes up with some unforgettable new adventure, like his off-off-Broadway production of "The Tempest" that's absolutely transporting. So let Bruno run free. He's got a lot to tell us, and we've got a lot to learn."
-The Washington Post

"This is not a book for the squeamish. There is bestiality, and rape, and what one might consider an incestuous relationship. Let's acknowledge that upfront, but then move on. If you let this be an excuse for not reading the book, you're missing out on one of the more effusive and unrestrained works of fiction in years . . . It's Bruno's voice that gives this novel the complexity and life it deserves. His stories, although not always reliable, are always abundantly full of the mysteries of humanity."
-Minneapolis Star-Tribune

"Ambitious . . . it throbs with energy and boils with passion as it expresses a dark vision of our essential nature that strikes uncomfortably home."
-Los Angeles Times

"Hale's exuberant début is the bildungsroman of Bruno, a chimp born in a zoo who forsakes his animalhood and ends up, hairless and human-nosed, imprisoned for a crime of passion. His hyperallusive, Nabokovian confession, dictated to an amanuensis, is the tale of "a first-generation immigrant to the human species," encompassing Milton, Whitman, Darwin, Diogenes, and Kafka. Along the way, Bruno becomes an experimental test subject, an Expressionist painter, a Shakespearean actor, and a murderer. He also becomes a lover-but the story doesn't stray into bestiality. (When the pair do consummate, he probes her in disbelief, as "Caravaggio's Thomas the Doubter does to the wound of the resurrected Christ.") The lyrical flourishes can become theatrical, and, toward the end, the narrative gets baggy, but Hale's relish for his subject, and his subject's relish for language, never flags."
-The New Yorker, In Brief

"Brilliant. It's a fantastic concept, that something that shares so much of our DNA can have something to say. The book is worth a read for the narrative voice alone-that of Bruno the chimp-who is erudite, arrogant, and more than a bit confused by the emotions humans take for granted."
-Newsweek's "Bookbag" feature

Benjamin Hale is a graduate of the Iowa Writers Workshop, where he received a Provost's Fellowship to complete his novel, which also went on to win a Michener-Copernicus Award. He has been a night shift baker, a security guard, a trompe l'oeil painter, a pizza deliverer, a cartoonist, an illustrator and a technical writer. He grew up in Colorado and now lives in New York.
Loading...
or
Not Currently Available for Direct Purchase