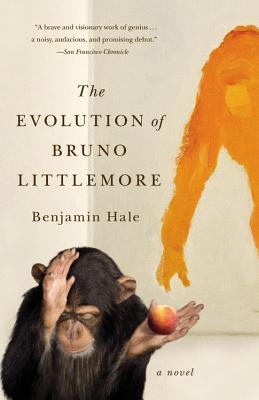 The Evolution of Bruno Littlemore

Praise For The Evolution of Bruno Littlemore…

"The most talented and intriguing young writer I've met in years. A writer with a capital W. . . It's like being a baseball scout in Oklahoma in the late 1940s and seeing this young kid running around centerfield, and you ask the guy next to you, 'Who's that?' And the guy says, 'I don't know, some kid named Mickey Mantle.'"—--Jonathan Ames, author of Wake Up, Sir!, The Extra Man and the current HBO series Bored to Death

"Benjamin Hale is a writer of rare and exciting talent. We'll be reading his books for years. Dive in."—--Anthony Swofford, author of Jarhead

"Hale's novel is so stuffed with allusions high and low, so rich with philosophical interest, that a reviewer risks making it sound ponderous or unwelcoming. So let's get this out of the way: THE EVOLUTION OF BRUNO LITTLEMORE is an absolute pleasure. Much of the pleasure comes from the book's voice . . . There is a Bellovian exhuberance befitting a Chicago-born autodidact . . . There's also great pleasure in the audacity of the story itself. THE EVOLUTION OF BRUNO LITTLEMORE announces that Benjamin Hale is himself a fully evolved as a writer, taking on big themes, intent on fitting the world into his work. Hale's daring is most obvious in his portrayal of the relationship between Bruno and Lydia, which eventually breaks the one sexual taboo even Nabokov wouldn't touch . . . Ultimately the point of these scenes is not to shock us but to ask what fundamentally makes us human, what differences inhere between a creature like Lydia and a creature like Bruno that disqualify the latter from the full range of human affection."

"We've finally got a book to screech and howl about. Benjamin Hale's audacious first novel, "The Evolution of Bruno Littlemore," is a tragicomedy that makes you want to jump up on the furniture and beat your chest . . . "The Evolution of Bruno Littlemore" is a brilliant, unruly brute of a book - the kind of thing Richard Powers might write while pumped up on laughing gas . . . When the novel's antics aren't making you giggle, its pathos is making you cry, and its existential predicament is always making you think. No trip to the zoo, western Africa or even the mirror will ever be the same . . . funny, sad and shocking . . . extraordinary intellectual range. . . But just when you want to stuff this chimp back in his cage, he comes up with some unforgettable new adventure, like his off-off-Broadway production of "The Tempest" that's absolutely transporting. So let Bruno run free. He's got a lot to tell us, and we've got a lot to learn."—Ron Charles, Washington Post

"Hale's exuberant début is the bildungsroman of Bruno, a chimp born in a zoo who forsakes his animalhood and ends up, hairless and human-nosed, imprisoned for a crime of passion. His hyperallusive, Nabokovian confession, dictated to an amanuensis, is the tale of "a first-generation immigrant to the human species," encompassing Milton, Whitman, Darwin, Diogenes, and Kafka. Along the way, Bruno becomes an experimental test subject, an Expressionist painter, a Shakespearean actor, and a murderer. He also becomes a lover-but the story doesn't stray into bestiality. (When the pair do consummate, he probes her in disbelief, as "Caravaggio's Thomas the Doubter does to the wound of the resurrected Christ.") The lyrical flourishes can become theatrical, and, toward the end, the narrative gets baggy, but Hale's relish for his subject, and his subject's relish for language, never flags."—The New Yorker

"Completely different . . . The language, the voice of this novelist and this character, are so strong that even as outrageous and grotesque and as angry as this book is, it is totally convincing. If you ever read Frankenstein, could you really believe that the monster would talk this way? Well this is the same - you buy into this from the first page . . . It is so beautifully written. The voice of this novelist is so intelligent, so exciting, the language is so rich . . . astounding . . . If you liked the book ROOM, you'll love this book . . . I mean, this is disturbing, but you'll fall in love with it."—Bill Goldstein, NBC's Weekend Today

"[This book] offers all those things we ask of our novels: rich entertainment and comedy, emotional sincerity that isn't cloying, and the ability to satisfy the immense ambition it sets for itself.

Benjamin Hale is a graduate of the Iowa Writers Workshop, where he received a Provost's Fellowship to complete his novel, which also went on to win a Michener-Copernicus Award. He has been a night shift baker, a security guard, a trompe l'oeil painter, a pizza deliverer, a cartoonist, an illustrator and a technical writer. He grew up in Colorado and now lives in New York.
Loading...
or support indie stores by buying on