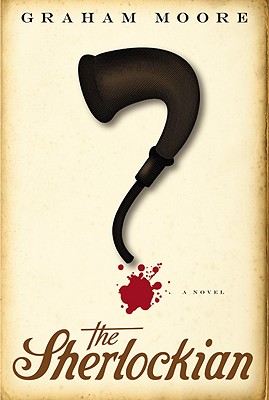 In December 1893, Sherlock Holmes-adoring Londoners eagerly opened their Strand magazines, anticipating the detective's next adventure, only to find the unthinkable: his creator, Arthur Conan Doyle, had killed their hero off. London spiraled into mourning -- crowds sported black armbands in grief -- and railed against Conan Doyle as his assassin.

Then in 1901, just as abruptly as Conan Doyle had "murdered" Holmes in "The Final Problem," he resurrected him. Though the writer kept detailed diaries of his days and work, Conan Doyle never explained this sudden change of heart. After his death, one of his journals from the interim period was discovered to be missing, and in the decades since, has never been found.

When literary researcher Harold White is inducted into the preeminent Sherlock Holmes enthusiast society, The Baker Street Irregulars, he never imagines he's about to be thrust onto the hunt for the holy grail of Holmes-ophiles: the missing diary. But when the world's leading Doylean scholar is found murdered in his hotel room, it is Harold - using wisdom and methods gleaned from countless detective stories - who takes up the search, both for the diary and for the killer.


Praise For The Sherlockian…

"It must be said of Graham Moore that he has his methods. Ingenious and amusing ones, too. You will enjoy their elucidation even if you are not a committed Sherlockian. The game's afoot!"
-Christopher Hitchens, author of Hitch-22

"What irresistible fun! As the literary intrigue deepens, with Arthur Conan Doyle, Bram Stoker, and some brainy Sherlock Holmes buffs as partners in crime, you don't have to be Holmes to deduce that The Sherlockian is a serpentine delight for anyone who loves mystery and historical suspense."
-Rupert Holmes, Edgar-award winning creator of The Mystery of Edwin Drood

"The Sherlockian is a brilliantly executed must-read... Engrossing, suspenseful and fast-paced, this debut novel manages to be both highly original as well as deeply reverential to its literary sources. It's difficult to find a new spin on Sherlock Holmes, but Graham Moore has pulled it off with flying colors."
-Matthew Pearl, author of The Dante Club

"The novel moves between the story of Harold, an eager young Holmes scholar of the 21st century embroiled in a Holmes-related murder mystery, and that of Sir Arthur Conan Doyle, Holmes' embittered creator, captive to his best-loved creation, fervently wishing his famous detective dead. In the book, both characters are afforded the opportunity to move from a vivid imaginary world of crime to playing the role of a real-life detective, and the thrill and confusion they feel is palpable."
-Kirkus Reviews, Fall Preview

"Moore's fiction provides a shrewd take on the noted author and his legendary scion."
-Kirkus Reviews

"The problem with Conan Doyle's Sherlock Holmes stories is that there aren't enough of them. Fans try to fill the gap with spin-offs, some of which work better than others. This engaging riff on the familiar themes by first-novelist Moore is one of the best . . . Moore spins his tale in prose that shifts easily from exposition to pathos to sly comedy . . . Mystery fans should love the mix of historical fiction and contemporary puzzle-solving. And Sherlockians? Try keeping them away."
-Booklist (Starred Review)

"This debut literary thriller, which revolves around a central mystery in Arthur Conan Doyle's life (why did he kill off Sherlock Holmes and then revive him?), weaves together two very different perspectives and time periods. At the annual Baker Street Irregular convention in 2010, newly minted "Irregular" Harold immediately begins investigating the murder of Alex Cale, a top Sherlock Holmes scholar who had bragged about finding the famously missing volume of Conan Doyle's diary. But when Cale is found dead in his hotel room, the diary is nowhere to be seen. Meanwhile, back in 1900, Conan Doyle, desperately sick of his famous character, decides he must channel his own creation to find the person who sent him a letter bomb. Teaming up with his friend Bram Stoker, the author finds the situation is much more complicated, involving suffragettes, cryptic tattoos, and murder. Verdict: The constant switching of narrators can be jarring, but Moore does an excellent job of making his characters and settings feel real, using his thorough knowledge of the Holmes stories to good effect. Given the enduring popularity of Sherlock Holmes, this title is an excellent choice for public libraries and historical mystery fans who enjoy Matthew Pearl's thrillers."
-Library Journal

"This is a fun revision of Doyle redux in both contemporary and vintage modes. Moore is a witty writer and populates his first book with engaging characters: Bram Stoker, for one . . . There is a much to take in here. Moore will leave you alternately awed and mystified."
-Blog, Curled Up With A Good Book

"Fun and games with Sherlock Holmes is a never-ending pursuit, as "The Sherlockian" by first-time novelist Graham Moore (Twelve, $24.99) proves. Fans of the Baker Street sleuth can follow the life of his creator, Arthur Conan Doyle, and an odd legacy that emerges in the present day."
-Pittsburgh Post-Gazette

"The tales of Conan Doyle and White, told in alternating chapters, make up "The Sherlockian," Graham Moore's entertaining debut novel. Both mysteries are well crafted, with gratifying and amusing nods toward the conflation of Conan Doyle and his most famous literary creation . . . exemplary weaving of historical fact and fiction . . . This is a novel clearly written with great affection, not just for Conan Doyle and Holmes, but their 21st-century fans as well."
-Associated Press

"I enjoyed The Sherlockian immensely. I couldn't put it down because it was so compelling and the mystery was so well done. Whether you are a huge fan of Sherlock Holmes, or, like me, don't know much about him, if you enjoy mysteries, you must pick up this book."
-S. Krishnas Books

"For mystery lovers, this book is a treat. For Sherlock Holmes lovers, it is indispensible."
-Huffington Post

"Replete with winking cameos and Holmes-worthy twists, The Sherlockian is an inspired historical suspense novel that will captivate Holmes fans and anyone who loves a good twisty, clever mystery."
-Amazon's, "Best Books of the Month"

"Spins a tale full of characters that make his first book a fun read . . . I found myself getting pulled into each story simultaneously since Moore deftly parallels the action taking place in both stories . . . Moore is obviously an ardent fan of both Sherlock Holmes and his creator. He does a good job of capturing the time period in 1893, even including some new scientific discoveries such as indoor lighting, which adds a nice authentic touch. Even if you're not a fan of Conan Doyle, Moore will incite some interest in reading a few of his stories . . . enough to make you want to see if you own a copy of THE HOUND OF THE BASKERVILLES or A STUDY IN SCARLET."
-TheBookReporter.com

"[Moore] gives us two mysteries for the price of one, and what ripping yarns they are . . . Moore uses alternating chapters to tell his two stories - a method that could become clumsy, but doesn't. Then the tales merge in a grand finale that, looking back, seems inevitable. The Sherlockian on your Christmas list will love this book. So will any mystery lover, even one who has never read a Sherlock Holmes story, if there be such an unfortunate creature."
-The Dallas Morning News

"Moore is well-steeped in Holmes lore but savvy enough as a writer to keep the reader's interest with the parallel, and eventually intersecting, plots."
-Los Angeles Times

"Moore deftly alternates THE SHERLOCKIAN between his two heroes . . . smoothly delivers an evocative view of late-19th century London as well as its 21st century version. The endearingly nerdy White is perfectly balanced by the arrogant and priggish Doyle. Doyle would be proud of Moore's ingenious THE SHERLOCKIAN. So would Holmes. As will any fan of Holmes."
-Sun Sentinel

"A first-time novelist fictionalizes real-life events to write a compelling mystery about the society of Sherlock Holmes scholars."
-The Daily Beast's "Hot Reads"

"[THE SHERLOCKIAN's] smart young author, Graham Moore, has done much more than fall into the fancy of Holmes's existence. He has fallen down a Holmes well. He's going to take a lot of readers with him too. Thanks to the sly self-awareness that keeps "The Sherlockian" smart and agile, it's possible to enjoy this book's laughable affectations and still be seduced by them. This is a novel by, for and about Holmes-quoting mystery nuts, and it understands what makes them happy. Red herrings, exclamations of "Elementary!" and the assurance that life's problems have logical solutions are at the core of Mr. Moore's world view . . . interestingly researched . . . based on something authentic . . . "The Sherlockian" manages to make a journey from the ridiculous (Harold White, instant detective?) to the sublime. And it is anchored by Mr. Moore's self-evident love of the rules that shape good mystery fiction and the promises on which it must deliver."
-The New York Times

"The mystery is gripping, and Moore has a feel for the transitional nature of Conan Doyle's era."
-New York Times, "Baker Street Irregular"

"The final book published by Twelve this year, THE SHERLOCKIAN rises above the expectation that one has come to expect from the New York publishing house. . . . . The narrative is delightfully shaped, intricately crafted and promises to entertain."
-LA2DAY

"A clever debut . . . an insightful look at the rise of celebrities, extreme fans and a character who continues to be bigger than life as well as a testament to the power of storytelling . . . Moore deftly alternates between two heroes working in two time periods on two continents. Doyle would be proud of Moore's ingenious novel."
-The Buffalo News

"The Sherlockian combines good pacing with an engaging plot, and its ample dose of Holmes quotes, errata and flair for humor have enough to keep anyone from an initiate to a dedicated Sherlockian on the hook . . . the kind of everyman adventure that one can't help but enjoy."
-Book Page

"Moore is well-steeped in Holmes lore but savvy enough as a writer to keep the reader's interest with the parallel, and eventually intersecting, plots. After the adventures come to a close and the secrets of Conan Doyle and Stoker are revealed, what remains are the core themes of "The Sherlockian": the need for resolution, the thrill of investigation and the power of story to transform humans into something larger than themselves. Moore combines all of these when Harold realizes there's more to life, and to stories, than mere endings."
-Los Angeles Times

"The Sherlockian is a well-written, fast paced and completely engaging homage to the legacy of Arthur Conan Doyle, in which an intriguing dose of literary history never stand in the way of an exciting present-day mystery."
-Scott Turow, author of Innocent

Graham Moore is a 28-year-old graduate of Columbia University, where he received his degree in Religious History. He currently lives in Los Angeles.
Loading...
or
Not Currently Available for Direct Purchase