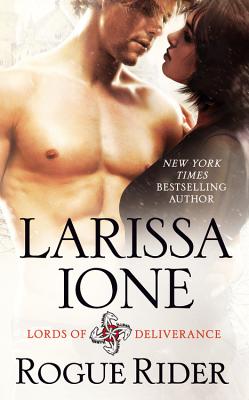 The Four Horsemen of the Apocalypse.

Born of a match between good and evil, four siblings stand between hell's minions and everything they want to destroy. They are the Lords of Deliverance, and they have the power to ward off Doomsday . . . or let it ride . . .

Jillian Cardiff came to this remote mountain town to forget the demon attack that almost killed her. Instead, she rescues-and falls for-a gorgeous stranger who has no memory of anything other than his name. Handsome, charming, and protective, Reseph seems like the kind of man whom Jillian can trust. But with hints of a troubling history of his own, he's also the kind of man who can be very dangerous . . .

Reseph may not know why he mysteriously appeared in Jillian's life, but he knows he wants to stay. Yet when Jillian's neighbors are killed, and demon hunters arrive on the scene, Reseph fears that he's putting Jillian in danger. And once it's revealed that Reseph is also Pestilence, the Horseman responsible for ravaging the world, he and Jillian must face the greatest challenge of all: Can they forget the horrors of a chilling past to save the future they both desire?

"Doomsday is fast approaching unless the remaining Horsemen of the Apocalypse can prevent it. In the previous Lords of Deliverance novel, Thanatos, the horseman of Death, was tricked and now the world may shake with his anger. Gifted storyteller Ione's tales are gripping and dark, filled with tragedy and hope. Transfixing!"—RT Book Reviews on Lethal Rider

"Ione's third Lords of Deliverance paranormal builds the secondary story line of Immortal Rider into a rollicking ride of thrills, angst, and sexual heat. Thanatos, aka Death, is one angry Horseman of the Apocalypse. Aegis Guardian and OCD sufferer Regan Matthews molested him while he was drugged, and those around him conspired to keep her resultant pregnancy a secret. Thanatos kidnaps Regan, vowing to keep her his sexual prisoner, but her genuine remorse over tricking him to impregnate her so that the birth of their baby might prevent the Apocalypse wears down his resolve and opens the door to a fiery and moving romance between damaged souls. Meanwhile, those trying to avert the upcoming end of the world must cope with double-crossing Watchers, false prophecies, vampires with a grudge, and the ongoing treachery of Death's brother Pestilence. Ione humanizes her leads and also captures the urgency of their mission, resulting in a very satisfying read."—Publishers Weekly on Lethal Rider

Ione has a true gift for imbuing her characters with dark-edged passion. . . a top notch read."—4 stars, RT Book Reviews on Desire Unchained

"The author's hard-edged style infuses the story with darkness while taking it to sizzling heights."—4 stars, RT Book Reviews on Pleasure Unbound