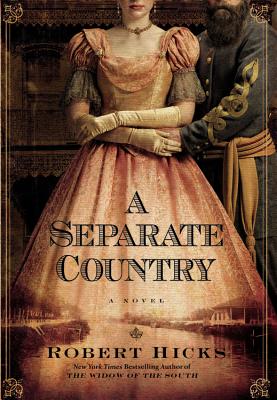 “John Bell Hood was one of the civil war's most tragic figures. He lost a leg at Chickamauga and the use of his left arm at Gettysburg, and he moved to New Orleans to start life afresh after the war. Hick's skillful weaving of several characters' points of view will keep raders eager to discover the story of Hood's search for peace and transformation.”
— Mary Gay Shipley, That Bookstore In Blytheville, Blytheville, AR
View the List

Set in New Orleans in the years after the Civil War, A Separate Country is based on the incredible life of John Bell Hood, arguably one of the most controversial generals of the Confederate Army--and one of its most tragic figures. Robert E. Lee promoted him to major general after the Battle of Antietam. But the Civil War would mark him forever. At Gettysburg, he lost the use of his left arm. At the Battle of Chickamauga, his right leg was amputated. Starting fresh after the war, he married Anna Marie Hennen and fathered 11 children with her, including three sets of twins. But fate had other plans. Crippled by his war wounds and defeat, ravaged by financial misfortune, Hood had one last foe to battle: Yellow Fever. A Separate Country is the heartrending story of a decent and good man who struggled with his inability to admit his failures-and the story of those who taught him to love, and to be loved, and transformed him.

Robert Hicks has been active in the music industry in Nashville for twenty years as both a music publisher and artist manager. The driving force behind the perservation and restoration of the historic Carnton plantation in Tennessee, he stumbled upon the extraordinary role that Carrie McGavock played during and after the Battle of Franklin. He is the author of The Widow of the South.