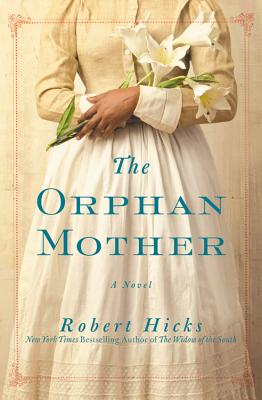 An epic account of one remarkable woman's quest for justice from the New York Times bestselling author of The Widow of the South and A Separate Country.

In the years following the Civil War, Mariah Reddick, former slave to Carrie McGavock--the "Widow of the South"--has quietly built a new life for herself as a midwife to the women of Franklin, Tennessee. But when her ambitious, politically minded grown son, Theopolis, is murdered, Mariah--no stranger to loss--finds her world once more breaking apart. How could this happen? Who wanted him dead?
Mariah's journey to uncover the truth leads her to unexpected people--including George Tole, a recent arrival to town, fleeing a difficult past of his own--and forces her to confront the truths of her own past. Brimming with the vivid prose and historical research that has won Robert Hicks recognition as a "master storyteller" (San Francisco Chronicle).

Praise For The Orphan Mother: A Novel…

"A novel about family and friendship and the boundaries of obligation and loyalty. It's about the power of knowledge and the temptation of revenge, about the psychic and social implications of the end of slavery in a racially unjust society. Filled with beautiful dialogue and finely-wrought characters, the novel is a must-read."
—Chapter 16

"THE ORPHAN MOTHER resonates with readers on many levels-as a compelling novel documenting the violent years of Reconstruction, as a heartfelt story of the inner strengths unearthed by a mother confronted with unspeakable sorrow, and as a memorable testament to friendships between young and old, male and female, black and white. The latter offers perhaps a ray of hope in these times of racial injustice we readers are still experiencing, 150 years after the events of this gripping and timely novel."—Bookpage

"Hick's bittersweet novel reveals a woman discovering a new sense of self in slavery's aftermath... A beautifully rendered portrait for all lovers of Civil War fiction."—Library Journal

"Speaks to timely questions about cultural appropriation... eloquent and subtle insights into the struggles of motherhood, relationships and loss"
—Atlanta Journal Constitution

"Offers a story of race and redemption...compelling...In Mariah, Hicks has created a strong and noble soul."
—Fort Worth Star Telegram

"When you finish THE ORPHAN MOTHER, Hicks's words seep into your soul."
—Franklin Homepage

"Hicks is a talented storyteller and this story moves at a clip."
—Publishers Weekly

"A fascinating continuation to the saga, THE ORPHAN MOTHERis a historical beauty."—Read It Forward

Robert Hicks is the New York Times bestselling author of the novels The Widow of the South and A Separate Country. He lives in Tennessee.
Loading...
or
Not Currently Available for Direct Purchase