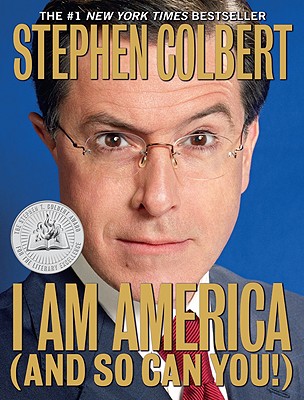 I Am America (And So Can You!)

Congratulations--just by looking at this webpage, you became 25% more patriotic.

From Stephen Colbert, the host of television's highest-rated punditry show The Colbert Report, comes the book to fill the other 23¬ø hours of your day. I Am America (And So Can You!) contains all of the opinions that Stephen doesn't have time to shoehorn into his nightly broadcast.

Dictated directly into a microcassette recorder over a three-day weekend, this book contains Stephen's most deeply held knee-jerk beliefs on The American Family, Race, Religion, Sex, Sports, and many more topics, conveniently arranged in chapter form.

Always controversial and outspoken, Stephen addresses why Hollywood is destroying America by inches, why evolution is a fraud, and why the elderly should be harnessed to millstones.

You may not agree with everything Stephen says, but at the very least, you'll understand that your differing opinion is wrong.

I Am America (And So Can You!) showcases Stephen Colbert at his most eloquent and impassioned. He is an unrelenting fighter for the soul of America, and in this book he fights the good fight for the traditional values that have served this country so well for so long.

Please buy this book before you leave the store

Stephen Colbert was The Daily Show's longest-running and most diverse correspondent. His personality, insight and overall rightness could only lead to The Colbert Report, a half-hour nightly platform for him to give his take on the issues of the day, and, more importantly, to tell you why everyone else's take is just plain wrong. The show has been hugely successful.
Loading...
or
Not Currently Available for Direct Purchase