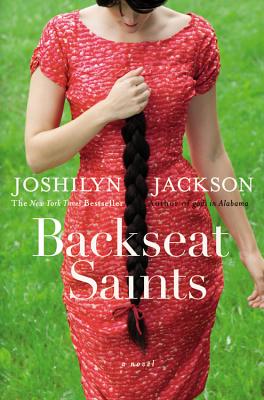 “Jackson writes like a woman on fire, hooking you in the very first sentence ('It was an airport gypsy that told me I had to kill my husband') and demanding total absorption straight through to the novel's stunning conclusion. There is nothing predictable in Backseat Saints except Jackson's strong voice and her genius at the art of storytelling.”
— Ellen Ward, FoxTale Book Shoppe, Woodstock, GA
View the List

Read this "enthralling" portrayal of the measures a mother will take to right the wrongs she's created while reigniting her rough and tough Texan bravery (Kathryn Stockett, bestselling author of The Help).

Rose Mae Lolley's mother disappeared when she was eight, leaving Rose with a heap of old novels and a taste for dangerous men. Now, as demure Mrs. Ro Grandee, she's living the very life her mother abandoned. She's all but forgotten the girl she used to be-teenaged spitfire, Alabama heartbreaker, and a crack shot with a pistol-until an airport gypsy warns Rose it's time to find her way back to that brave, tough girl . . . or else. Armed with only her wit, her pawpy's ancient .45, and her dog Fat Gretel, Rose Mae hightails it out of Texas, running from a man who will never let her go, on a mission to find the mother who did. Starring a minor character from Jackson's bestselling Gods in Alabama, Backseat Saints will dazzle readers with its stunning portrayal of the measures a mother will take to right the wrongs she's created, and how far a daughter will travel to satisfy the demands of forgiveness.

"Backseat Saints will pull you in and won't let you out until the last page. Raw, tangy and funny, it is an enthralling peek into the secret sorority of mistreated women. Follow the journey of one courageous, witty woman who decides, I'm not going to take this anymore. I love reading about smart, flawed and ultimately wise women, like Rose Mae. " --Kathryn Stockett, #1 New York Times bestselling author of THE HELP

"Joshilyn Jackson dives into darker, deeper water in BACKSEAT SAINTS-- with all her readers firmly in tow. As always, a riveting read." --Lee Smith, New York Times bestselling author of THE LAST GIRLS and MRS. DARCY AND THE BLUE-EYED STRANGER

"BACKSEAT SAINTS is an unputdownable story about love, survival, and shedding the past. Rose Mae Lolly is tough, passionate, funny, and fierce, one hell of a heroine to guide us through one hell of an adventure. Any time Joshilyn Jackson is in the driver's seat, I'm along for the ride. --Michelle Richmond, New York Times bestselling author of THE YEAR OF FOG

"The arrival of a Joshilyn Jackson novel feels like the first perfect day in a favorite season and BACKSEAT SAINTS is no exception." --Laura Lippman, author of LIFE SENTENCES

"Readers everywhere will rejoice to be back in the land of gods in Alabama. BACKSEAT SAINTS is a heart-thrilling, can't-stop-reading book about the unique and unforgettable Rose Mae Lolley. I loved this novel." --Michael Lee West, author of MERMAIDS IN THE BASEMENT

"From the moment I began reading, I could not put this book down. Rose Mae is an enduring character with a fierce and unstoppable spirit. This is a beautifully written story about an important subject. Pass the word." --Brunonia Barry, New York Times bestselling author of THE LACE READER and THE MAP OF TRUE PLACES

"A sizzling chunk of Southern Gothic."—Gina Webb, The Altanta Journal-Constitution

Joshilyn Jackson, a native of the Deep South, has worked as an actor and an award-winning teacher, and is now a writer and a mother of two. She is the author of Gods in Alabama; Between, Georgia; The Girl Who Stopped Swimming; and Backseat Saints. Jackson lives with her husband and children outside of Atlanta. Visit her website at www.joshilynjackson.com.
Loading...
or
Not Currently Available for Direct Purchase