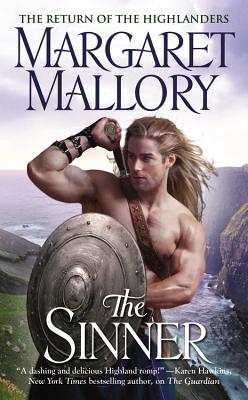 The Sinner (The Return of the Highlanders #2)

The Return of the Highlanders: Book 2
Four fearless warriors return to the Highlands to claim their lands and legacies. But all their trials on the battlefield can't prepare them for their greatest challenge yet: winning the hearts of four willful Scottish beauties.

Alex MacDonald is known for his skill as a warrior, his prowess with women, and his vow to never take a wife. But now his chieftain has asked him to make the ultimate sacrifice: wed Glynis MacNeil, a lass famed throughout the Highlands for her exquisite beauty-and defiant ways.

Familiar with heartbreak, Glynis refuses to fall for another handsome scoundrel. Yet when Alex's past sins force an unlikely union, Glynis gives in to temptation and becomes his wife. Will their newfound passion be strong enough to fight the enemy that threatens their home, their clan, and their very lives?

Praise For The Sinner (The Return of the Highlanders #2)…

"4 1/2 Stars! The sizzling sexual tension between the hero and heroine will leave readers breathless."—RT Book Reviews

"Mallory's ability to take history and legend and turn it into a masterpiece is simply magnificent!"—FreshFiction.com

"The Sinner is a novel overflowing with everything you expect from a Highlander novel - fierce passion, male arrogance, and female determination. But The Sinner offers so much more - a real friendship between husband and wife, the gentle interactions between a father and daughter, and the sweetness of true love."—TheRomanceDish.com

"Alex is a delicious male lead that would send any woman's heart aflutter."—NightOwlReviews.com

"TOP PICK! 4 1/2 stars! Mallory imbues history with a life of its own, creating a deeply moving story. Her characters are vibrantly alive and full of emotional depth, each with their own realistic flaws. Her sensuous and highly passionate tale grabs the reader and doesn't let go."—RT Book Reviews on The Guardian