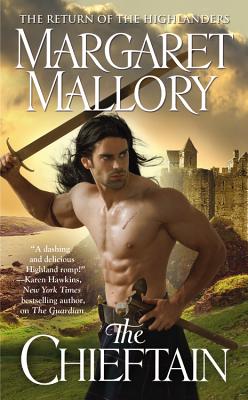 The Chieftain (The Return of the Highlanders #4)

Connor, chieftain of the MacDonalds of Sleat, holds the fate of his people in his hands. Rival clans are plotting to take over his lands, and duty determines whom he will fight, trust . . . even marry. Seeking guidance, Connor turns to Ilysa, a young lass with the gift of foresight, who reveals an approaching danger-and a passion that burns only for him. But the warrior must make a powerful marriage alliance, and Ilysa's bloodline is far too humble.

With her powers to heal and see evil where others cannot, beautiful Ilysa dresses plainly, speaks softly, and loves her chieftain from afar. Yet when Connor finally stokes the embers of desire that have so long burned within her, Ilysa feels bliss unlike any she's ever known. Now as he is forced to place duty before happiness, Ilysa senses Connor is in grave peril. Can she find a way to prove she is the woman he needs by his side?

Praise For The Chieftain (The Return of the Highlanders #4)…

"Readers will appreciate the well-developed romance, historic detail, and red-hot passion as they root for two strong protagonists who bravely face danger at every turn."—Publishers Weekly

"THE CHIEFTAIN, the bittersweet, but gloriously triumphant final installment to Margaret Mallory's Return of the Highlander series, has achieved what few series are capable-a conclusion that's every bit as addictive, tantalizing, entertaining and satisfying as its predecessors, if not more."—RomanceJunkies.com

"TOP PICK! 4 1/2 stars! Mallory imbues history with a life of its own, creating a deeply moving story. Her characters are vibrantly alive and full of emotional depth, each with their own realistic flaws. Her sensuous and highly passionate tale grabs the reader and doesn't let go."—RT Book Reviews on The Guardian

"The story sizzles with romance and adventure."
—RomRevToday.com on Knight of Desire