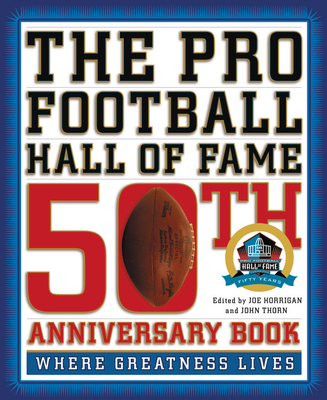 There is no question that football is indeed America's most popular sport, and the Pro Football Hall of Fame's 50th Anniversary book totally captures our passion for the game.

The book has been crafted by Joe Horrigan, the Hall's VP of Communications/Exhibits, along with John Thorn, creator of Total Football, and the end result is a beautifully bound keepsake for any serious football fan.

The 50th Anniversary Book features essays by football writers, broadcasters, and celebrated players. Every living Hall of Famer will contribute a commentary on some aspect of the game and its history; each deceased member will be represented in a sidebar or pullout quote. In addition, the book features rarely seen photos and artifacts of some of the Hall's greatest treasures.

Joe Horrigan is a nationally recognized expert on the sport of football, and serves as the HOF's vice president for Communications/Exhibits.

John Thorn is a sports historian of long standing, and is the author of numerous sports books. He also serves as the official historian for Major League Baseball.
Loading...
or
Not Currently Available for Direct Purchase