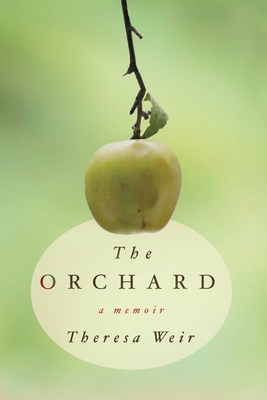 “Weir's memoir is not only the story of her struggle as a troubled youth, but also of her acceptance into the hard life of a farmer's wife under an oppressive and controlling family matriarch. The Orchard is a love letter to her husband and to the life that they built together, as well as a love letter to nature and what nature will yield. It is also a tale of caution regarding the great harm that is done with pesticides and aggressive farming. Weir tells her story with grace, compassion, and unflinching honesty.”
— Calvin Crosby, Books Inc., Berkeley, CA
View the List

The Orchard is the story of a street-smart city girl who must adapt to a new life on an apple farm after she falls in love with Adrian Curtis, the golden boy of a prominent local family whose lives and orchards seem to be cursed. Married after only three months, young Theresa finds life with Adrian on the farm far more difficult and dangerous than she expected.

Rejected by her husband's family as an outsider, she slowly learns for herself about the isolated world of farming, pesticides, environmental destruction, and death, even as she falls more deeply in love with her husband, a man she at first hardly knew and the land that has been in his family for generations. She becomes a reluctant player in their attempt to keep the codling moth from destroying the orchard, but she and Adrian eventually come to know that their efforts will not only fail but will ultimately take an irreparable toll.

Theresa Weir is a USA Today bestselling author of nineteen novels that have spanned the genres of suspense, mystery, thriller, romantic suspense, and paranormal; her work has been translated into twenty languages. Her debut title was the cult phenomenon, Amazon Lily, initially published by Pocket Books and later reissued by Bantam. Writing as Theresa Weir, she won a RITA for romantic suspense (Cool Shade) and the Daphne du Maurier Award (for Bad Karma). She has also published as Anne Frasier.

Her thriller and suspense titles have hit the USA Today list (Hush, Sleep Tight, Play Dead) and have been featured in Mystery Guild, Literary Guild, and Book of the Month Club. Hush was both a RITA and Daphne du Maurier finalist. Theresa spent twenty years living on a working apple farm, and now divides her time between St. Paul, Minnesota, and a century-old Gothic church in rural Wisconsin.

Praise For The Orchard: A Memoir…

A hypnotic tale of place, people, and of Midwestern family roots that run deep, stubbornly hidden, and equally menacing-THE ORCHARD is sublime and enchanting, like a reflecting pool, touch the surface and watch the ripples carry you away.

--Jamie Ford, NYT bestselling author of Hotel on the Corner of Bitter and Sweet

The Orchard is a lovely book in all the ways that really matter, one of those rare and wonderful memoirs in which people you've never met become your friends. I read it in a single sitting, lost in the story, and by the time I put it down, I was amazed by Weir's ability to evoke such genuine emotion. Read it: you'll be glad you did.—Nicholas Sparks
or
Not Currently Available for Direct Purchase
Copyright © 2020 American Booksellers Association