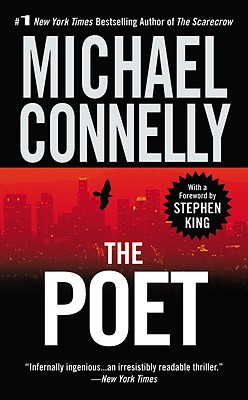 An electrifying standalone thriller that breaks all the rules! With an introduction by Stephen King.

Death is reporter Jack McEvoy's beat: his calling, his obsession. But this time, death brings McEvoy the story he never wanted to write--and the mystery he desperately needs to solve. A serial killer of unprecedented savagery and cunning is at large. His targets: homicide cops, each haunted by a murder case he couldn't crack. The killer's calling card: a quotation from the works of Edgar Allan Poe. His latest victim is McEvoy's own brother. And his last...may be McEvoy himself.

Praise For The Poet (Jack McEvoy #1)…

"Pulse Pounding . . . Connelly is one of those masters of structure who can keep driving the story forward, paragraph by paragraph, in runaway-locomotive style."—USA Today

"Prepare to be played like a violin. Connelly writes suspense out of every possible aspect of Jack's obsessive hunt for his brother's killer."—Kirkus Reviews

"Connelly keeps a surprise up his sleeve until the very end of this authoritatively orchestrated thriller."—Publishers Weekly

"An intriguing new protagonist. . . . Connelly doesn't just talk about poets, he writes like one, with a spare, elegiac tone that is the perfect voice for the haunting tale he has to tell."—People

Michael Connelly is the author of thirty-six previous novels, including #1 New York Times bestsellers The Dark Hours andThe Law of Innocence. His books, which include the Harry Bosch series, the Lincoln Lawyer series, and the Renée Ballard series, have sold more than eighty million copies worldwide. Connelly is a former newspaper reporter who has won numerous awards for his journalism and his novels. He is the executive producer of three television series: Bosch,Bosch: Legacy, and The Lincoln Lawyer. He spends his time in California and Florida.
Loading...
or
Not Currently Available for Direct Purchase