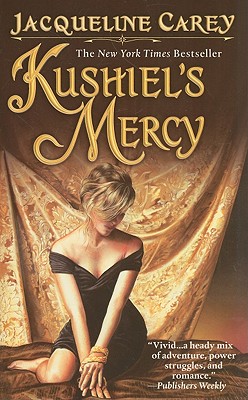 Having paid dearly for ignoring Elua's edict to love as thou wilt, Imriel and Sidonie have finally come forward to publicly confess their love for each other -- only to watch the news ignite turmoil throughout the land. Those who are old enough cannot forget the misdeeds of Imriel's mother, Melisande, whose self-serving lies plunged their country into war.
In order to quell the uprising, Queen Ysandre hands down a decree: she will not divide the lovers, but neither will she acknowledge them. And if they decide to marry, Sidonie will be disinherited.
That is, unless Imriel can find his mother and bring her back to Terre D'Ange to be executed for treason . . .

"In this vivid conclusion to the...trilogy, Carey delivers a heady mix of adventure, power struggles, and romance."—Publishers Weekly on KUSHIEL'S MERCY

"Carey brings Alba vividly alive again in another stunner... A multilayered plot and Imriel's complex inner life as he struggles with pain and loss in the present while trying to make peace with the past hook the reader but good."
—Booklist *starred review* for KUSHIEL'S JUSTICE

"Carey has wowed us throughout the...trilogy, which this book senationally concludes, leaving faithful readers feeling both deliciously sated and hungry for more from her."—Booklist on KUSHIEL'S MERCY