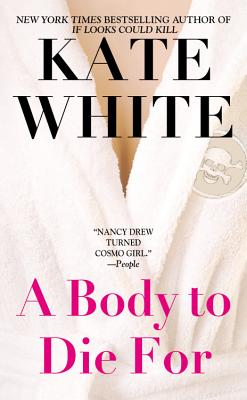 A Body to Die For

Bailey Weggins, the very clever and the very irreverent true crime writer for Gloss, a leading women's magazine, is in desperate need of a little R&R after solving the murder of her boss' nanny. A trip to the Cedar Inn and Spa seems like the perfect remedy. Bailey, totally full of Zen after her deep tissue massage, looks forward to all of the other treatments. Getting ready for bed, she realizes she forgot the Rolex that her father gave her before he died. She and Piper, her massage therapist, go back, only to discover a dead body getting a seaweed wrap. The body turns out to be Anna, another massage therapist.

Detective Beck arrives, and against her better judgment, Bailey becomes infatuated with him, forgetting her tepid relationship with her boyfriend. Bailey learns that one of Anna's clients died of heart failure after she worked on him. Then the spa owner's second husband, who was clandestinely pursuing Anna, becomes suspect number one. But Anna's past also provides numerous suspects. Was she killed by a client who'd been rebuffed? Or by a male therapist who she'd apparently spurned? Or the son of the heart attack victim who blames the spa for this father's death? Or by someone from her deeper past? Bailey keeps digging, getting closer to the truth. Then there's a second horrifying murder at the inn, and it's clear that Bailey's life is in danger. Nothing prepares her for the answer she finds as she finally discovers who the murderer is.

Kate White is the New York Times bestselling author of twelve murder mysteries and thrillers and several hugely popular career books, including I Shouldn't Be Telling You This: How to Ask for the Money, Snag the Promotion, and Create the Career You Deserve, and Why Good Girls Don't Get Ahead but Gutsy Girls Do. For 14 years, White was the editor-in-chief of Cosmopolitan magazine, where she increased overall circulation by thirty percent and made Cosmo the #1 magazine in the U.S. in single copy sales.
Loading...
or
Not Currently Available for Direct Purchase