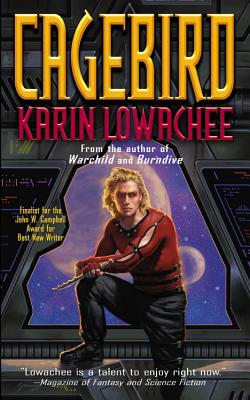 Pirate Protege At age four, Yuri Kirov watched his home colony destroyed by the alien enemy. By six, he was a wounded soul, fending for himself in a desolate refugee camp, and still a child when the pirates found him. Now twenty-two, Yuri is a killer, a spy, an arms dealer, and a pirate captain himself-doing life in prison. That is until EarthHub Black Ops agents decide to make Yuri their secret weapon in a covert interstellar power grab. Released from jail, but put on a leash by the government, Yuri is more trapped than ever. Controlled by men even more ruthless than the brigands he's ordered to betray, Yuri is back again in deep space where his survival depends on a dangerous act: trusting a stranger's offer of help...

Karin Lowachee was born in Guyana, South America and moved to Toronto, Canada when she was two. Before her foray into fantasy, she wrote three highly-acclaimed science fiction novels - Warchild, Burndive, and Cagebird. Warchild won the Warner Aspect First Novel Award and Cagebird won the 2006 Gaylactic Spectrum Award and the Prix Aurora Award and was a finalist for the 2002 Philip K. Dick Award. She currently resides in Ontario, Canada.
Loading...
or
Not Currently Available for Direct Purchase