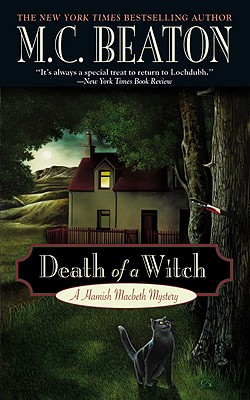 Death of a Witch (A Hamish Macbeth Mystery #24)

From the New York Times bestselling author of the Agatha Raisin television series, travel to the Scotland Highlands with this classic Hamish Macbeth cozy mystery.

Returning from a vacation, Constable Hamish Macbeth senses a dark cloud of evil hanging over his Scottish village of Lochdubh. Newcomer Catriona Beldame has cast a bewitching spell over the town, causing the local men to visit her cottage at all hours of the night and infuriating the women. Hamish suspects that she is a great danger to the town. Before he can prove that Catriona is truly wicked, she is brutally murdered-and Hamish becomes the prime suspect in the case. The constable will call upon the assistance of a pretty female forensic expert as he attempts to clear his name . . . and perhaps even find some romance. But when more violence breaks out, loyal Hamish must use all his detective skills to restore peace to his beloved village.


Praise For Death of a Witch (A Hamish Macbeth Mystery #24)…

Praise for M.C. Beaton and the Hamish Macbeth series:
"It's always a pleasure to return to Lochdubh, the picturesque village in the Scottish highlands."—New York Times Book Review

"Superb entertainment, as rich and warming as a fine malt whisky, and every bit as addictive."—Houston Chronicle

"Macbeth is the sort of charcter who slyly grows on you...as you realize that beneath his unassuming exterior, he's a whiz at cutting through all the hokum."—Chicago Sun-Times