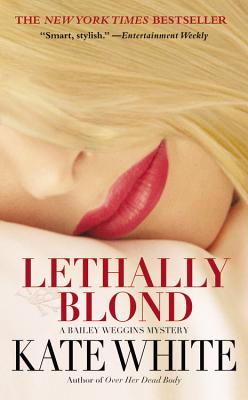 Whenever a celebrity throws a phone, crashes a car, or kills a spouse, celebrity journalist Bailey Weggins is there to cover it for the gossip magazine Buzz. Now, the new television show Morgue is the talk of the town, and just as Bailey starts reminiscing about her brief summer fling with the show's gorgeous star, Chris Wickersham, he calls.

But Chris isn't thinking about rekindling their old flame. His friend and fellow actor on the show has gone missing, and while nobody else seems to be alarmed, Chris can't believe his friend would just run off while on the brink of stardom. When Bailey starts to investigate as a favor for Chris, she soon realizes there is much more to the disappearance than meets the eye, and unless she can unearth the truth, she could become the inspiration for Morgue's next episode.

"[LETHALLY BLOND] is as clever as it is hot."
—Booklist

"Sharper than a stiletto heel, funnier than a bad dye job and full of fuchsia herrings...White keeps the reader guessing whodunit to the end."
—Publishers Weekly

Kate White is the New York Times bestselling author of twelve murder mysteries and thrillers and several hugely popular career books, including I Shouldn't Be Telling You This: How to Ask for the Money, Snag the Promotion, and Create the Career You Deserve, and Why Good Girls Don't Get Ahead but Gutsy Girls Do. For 14 years, White was the editor-in-chief of Cosmopolitan magazine, where she increased overall circulation by thirty percent and made Cosmo the #1 magazine in the U.S. in single copy sales.
Loading...
or
Not Currently Available for Direct Purchase